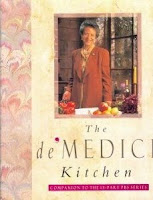 de' Medici di OTTAJANO Kitchen???"
<<<A Note From the Webmaster:

“What are the Medici up to THESE DAYS?” I am asked that question a couple of times a week. “Sleeping in glorious repose in ,” is my usual reply, “since 1743.”
“But aren’t any Medici around NOW? Like…you know…ALIVE?!” So, I plod through the complicated story of the Medici Tornaquinci and the Medici di Ottajano - still out there, on remote branches of the Family Tree.
“What about that classy lady with the cookbooks and the television series?” At least in , Lorenza de’ Medici is a household word.
So, see below… Just for fun! Ed G.>>>

To: Lorenza de' Medici (with all our hearts)
From: The Medici™


We knew your people back in the sixteenth century, before they moved to . And Ottajano is still DOWN THERE somewhere, last time we looked.

Ottajano (a.k.a. Ottaviano), c.1906
after an eruption of Mount Vesuvius.
We wish you well, Lorenza. And you do look very grand in your kitchen. But there are Medici and Medici™. And...FRANKLY...we haven't had a Christmas Card from YOUR SIDE since 1743!

CEASE AND DESIST sounds a bit rough. And you are an umpteenth cousin. But MEDICI DI OTTAJANO is still in the public domain. So, heads up and have a nice day!

WE (by the Grace of God) US

The Medici™ (accept no substitutes!)

PHOTOGRAPHS: From the web.
For more information about a remarkable woman:
COLTIBUONO