A rattle-trap motorino with a (highly collectible) old-series license plate. Guaranteed to bring a smile to any forty-something Florentine guy - who saved up to buy the same cheapo model right out of high school.
Parked on a fascio-studded sewer cap. Guaranteed to bring a frown (or more likely, a blank look) to his father and grandfather - who spent their lives pretending that Benito Mussolini never existed. 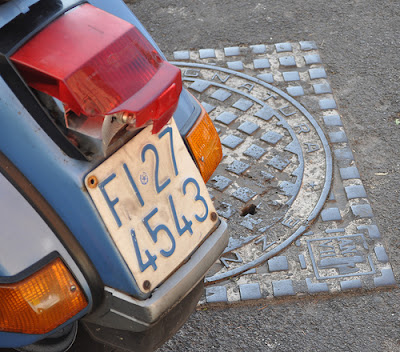 The Spirit of Progress was the presiding genius of Fascist Italy, which in most places meant running water and flush toilets - often for the first time. Even in relatively advanced towns (like Florence) old-fashioned sewer caps were usually stone, not cast iron.
The Cult of Modern Improvements brought...well...improvements up and down the peninsula. It also brought a unique branding opportunity.
Wherever you go in Italy, you can see (or ignore) thousands of (highly uncollectible) Mussolini Sewer Caps. Right under your feet.
Like portals to a strange netherworld.
Or emblems of national amnesia.
N.B. 1922 = Year One Fascist Era (The March on Rome: The Duce marches onto a train in Milan Station. And the rest is history...or not.) SO, 1929 = Year Seven.
More MUSSOLINI?
CLICK HERE!
More MYSTERIES OF FLORENCE?
CLICK HERE!

PHOTOGRAPH: On a Florentine street, near the Fortezza da Basso
© Lyle Goldberg