1501-4:  Michelangelo sculpts a monumental marble David
to surmount a buttress at Florence Cathedral: 1 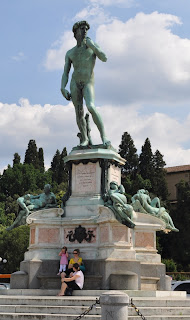 1871:  The marble David is memorialized as the centerpiece of a bronze aggregation at Piazzale Michelangiolo (note the quaint spelling of "Michelangelo"), flanked by renditions of the artist's Four Times of Day in the Medici New Sacristy at San Lorenzo: 3

Meanwhile in 1873:  The original David is transferred to the Accademia Gallery.

Also in 1873:  A marble replica of the David is placed in front of the Palazzo Vecchio.


2009:  An Asian visitor pays homage to Michelangelo's David (Imitation Being the Sincerest Form of Flattery): 4 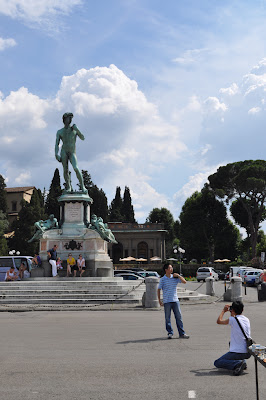