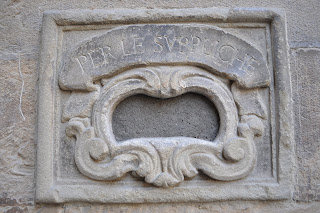 PER LE SUPPLICHE = FOR SUPPLICATIONS

The Uffizi Palace: An itinerant printseller ambles by the Porta delle Suppliche - the Gate of Supplications (alternately: “petitions”, “appeals”, or “requests”). Bearing an armload of lushly romantic views of no place on earth. 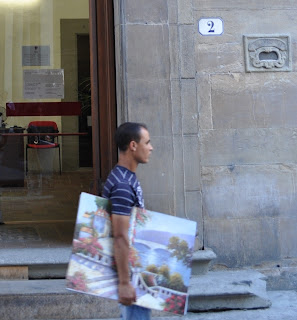 From 1580 until the end of Medici rule (1737), this was the most famous doorway in Florence - or at least, the doorway that embodied the most intense hopes and fears.
The Grand Dukedom of Tuscany was an absolute monarchy. Here at the Porta delle Suppliche, the ruling prince accepted formal appeals from his subjects - for stays of execution, for government contracts, for personal advancement...and so on.
Usually by way of the Bocca delle Suppliche ("Mouth of Supplications") - now sealed with cement. 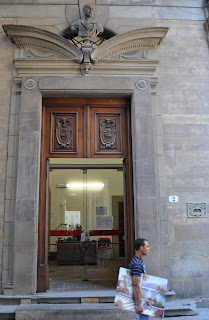