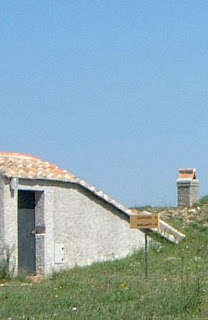 "Oh, dear God! Not ANOTHER Etruscan Necropolis!"
"But they're ALL WONDERFUL!"
"THAT'S THE PROBLEM... Haven't we had enough eternity for one day?"
"So are you saying, DON'T STOP HERE?!"
"YES! But we can tell everyone that we did!"

A View of the Necropolis of Tarquinia,
at nearby Monterozzi ("The Mounds").

Every ten minutes, another sign pops up. Telling us to turn off the road...

Back in the old days, this region (the coastal border-land between Tuscany and Latium) was merely malarial.
But that was before Etruscan Fatigue set in. 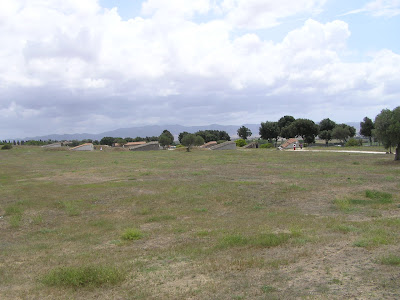 Another View of the Necropolis of Tarquinia.
Amidst the relentless profusion of Etruscan sites, Tarquinia is certainly the most discouraging - at first glimpse.
From a distance, it looks like an old mining camp - with a huddle of cabins at the mine heads and grassed-over slag heaps.
If the Seven Dwarves popped up singing over the ridge, we would scarcely be surprised...
(See the largely irrelevant preceding post,
DWARF ENVY ) 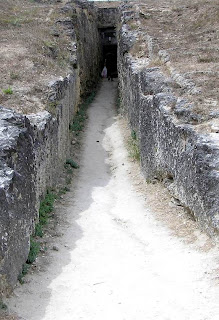 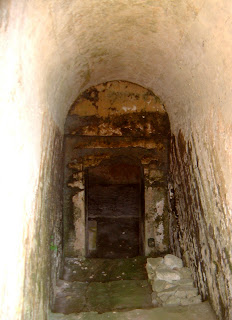 Two Excavated Tomb Shafts at Tarquinia.
But how do we tell a mining pit from a tomb shaft?
Or a slag heap from a tumulus?
(TRAVEL TIP: Bring a roll of paper towels and a bottle of your favorite window cleaner. Otherwise, you will spend most of your time at Tarquinia peering through hair grease and nose prints.) 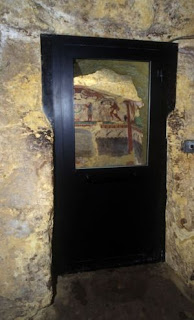 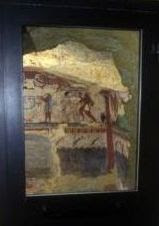 Peering into the Tomb of the Lionesses (Sixth Century B.C.)


BUT THEN, at the bottom of each tunnel, there is a moment of revelation... And time stands still - whether we want it to or not. 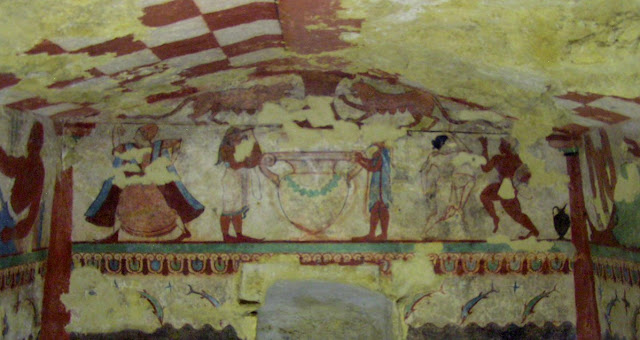 Scenes of Celebration from the Tomb of the Lionesses
(Sixth Century B.C.)
Right before our eyes, we see Gods and Mortals, Sacrifices and Offerings... Mourners at the Door of the Sepulcher, from the
Tomb of the Augurs (Sixth Century B.C.)
But most of all, we see dances... 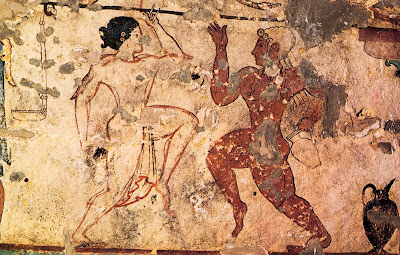 ﻿ Dancers from the Tomb of the Lionesses
(Sixth Century, B.C.)
...athletic contests... 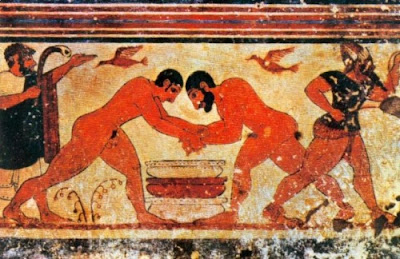 Wrestlers from the Tomb of the Augurs
(Sixth Century B.C.)
...hunting and fishing... 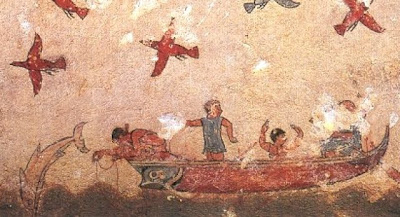 From the Tomb of Hunting and Fishing
(Sixth Century B.C.)
...and lovemaking (of a sort).

Banquet Scene from the Tomb of the Leopards (Fifth Century B.C.)
Emblazoned for eternity on the walls of subterranean tombs... 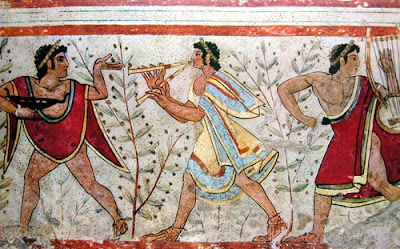 Cupbearer and Musicians from the Tomb of the Leopards
And even today,
Past meets Present in a nearby bar. 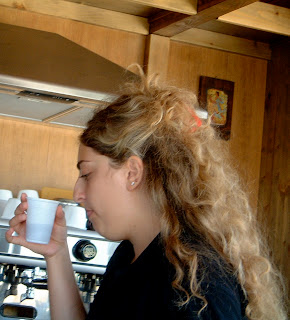 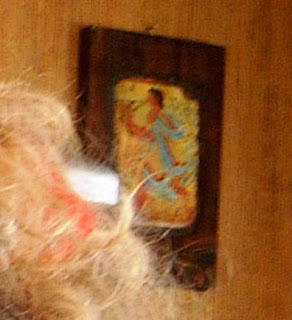 Taking a break, at the Etruscan Necropolis of Tarquinia.
(A tip of the hat to Rosemarie Mulcahy, who exclaimed, "Quick! There's an Etruscan Face!
Don't let it get away!")

From the Tomb of Hunting and Fishing
(Sixth Century B.C.)
PHOTOGRAPHS:
Scenes from the Necropolis of Monterozzi at Tarquinia:
© Lyle Goldberg
Tarquinian Tomb Paintings: From the Web