An aerial view of a cluster
of Etruscan burial places. 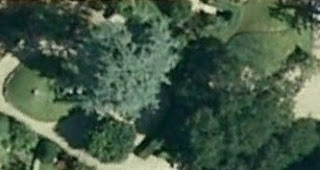 The Inghirami Tomb is beneath the grassy mound
(tumulus) in the upper right corner. 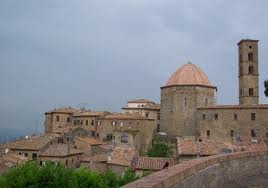 A view of Volterra.

In 1862, Don Filippo Gori -  an erudite priest - wrote from the city of Volterra in central Tuscany, reporting on the antiquarian activities of some local aristocrats:

“Back in May of last year [1861], the two Inghirami brothers,  Signori Jacopo and Lodovico, were vacationing at their retreat."

"Being lovers of all things associated with their native place [Volterra], they began excavating that parcel of land that looks out over their villa...and they discovered a grandiose hypogeum [subterranean structure]."
"Since access is easy, those of scholarly inclination can now form a true and accurate idea of those mortuary houses in their complete state.” 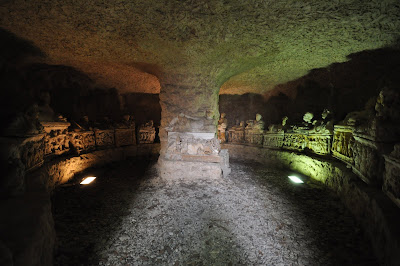 View of the Inghirami Tomb from the entrance.

No one will ever forget the emotional impact of stepping into the Inghirami Tomb for the first time.

Two tiers of alabaster funerary urns (fifty-three in number) emerge from the darkness. The Etruscan elite is staring us down - from the world beyond. 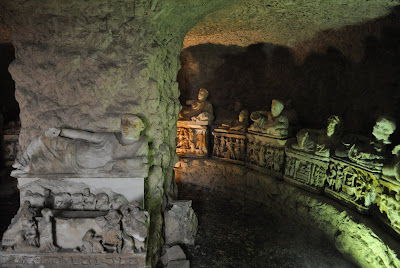 This uncanny effect is heightened by the translucent alabaster of the urns. A rare and precious material - and a prized Volterran specialty. 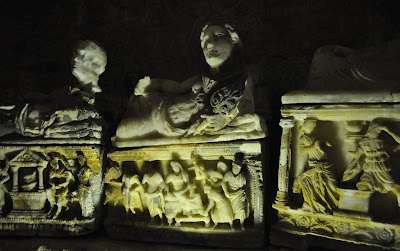 In the shadows beyond, we can just perceive a second row of figures peering over the shoulders of the first. 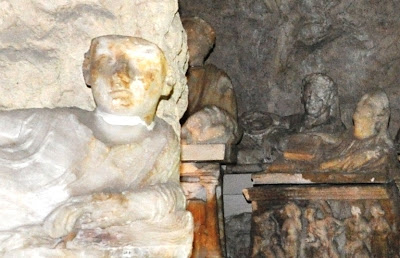 An enhanced photograph from the Inghirami Tomb.
The Inghirami Tomb is an awesome nexus of cosmic powers. People who mattered immensely in their own day confront us across the Great Divide.


However, the Inghirami Tomb left Volterra more than a century ago. And its inhabitants have been  reduced to Etruscan Re-enactors in a Florentine garden, performing for visitors on cue. 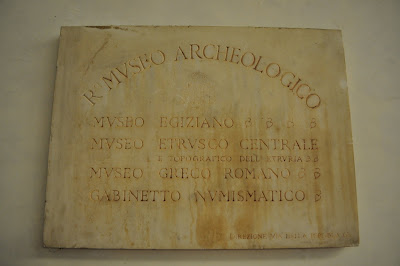 
A representative series of Etruscan burials was sent to Florence from various sites throughout Central Italy.  The Inghirami Tomb made a seventy kilometer journey in 1901. Then it was reburied under a fresh tumulus, filled with empty funerary urns and quickly became a star attraction. 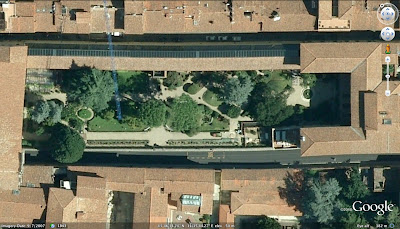 An aerial view of the Archeological Museum in Florence;
the Inghirami tumulus appears in the garden to the upper right. 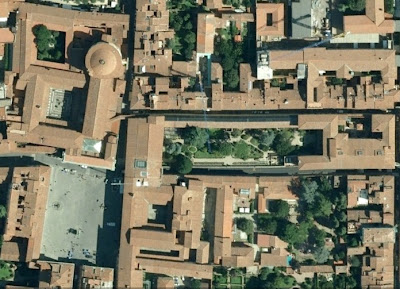 An aerial view of  Florence. The Archeological Museum is at
the center right and Piazza Santissima Annunziata at the lower left.
In the luxuriant garden of the Archeological Museum, it now keeps company with a host of other corpseless (or ashless) interments.﻿ Together, they form a handy toy necropolis - a walk-in archeology textbook or a sepulchral petting zoo.
A century ago, this was hailed as a bold innovation - bringing these mysterious and evocative artifacts to the public, rather than the other way around. And judging by the reactions of present-day visitors, it still provides the kind of effortless experience that most of us seek. 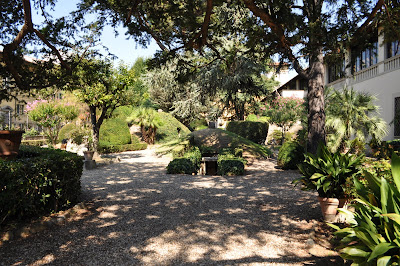 A view of the lushly landscaped Etruscan neo-necropolis
at the Archeological Museum in Florence.
Awash in oleanders, we see a fanciful Etruscan Temple (contrived in 1932) rising above two Sixth Century B.C. chamber tombs of the "rowhouse" type, transferred from Orvieto (in Umbria)  to Florence a hundred years ago. 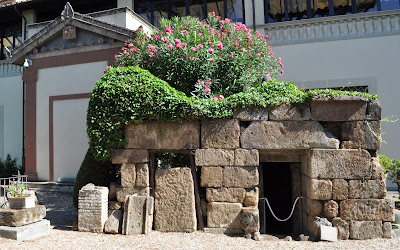 A tomb of the archaic period from Orvieto and a Tempietto
designed by architect Luigi Ballerini (1932).
We encounter a late Seventh Century B.C. burial chamber from Vetulonia (in ) – now stranded above ground, strangely indecent without its tumulus. The "pine cone" marker (cippus) at the entrance was lifted from some other Vetulonian tomb. The lintel, inscribed with the name of the departed, is a plaster replica (complete with a metal inventory tag.) The original was lost many years ago, along with the remains of the deceased. 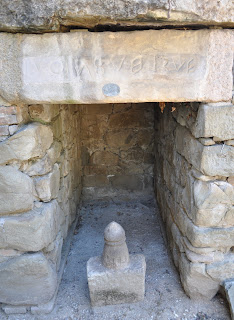 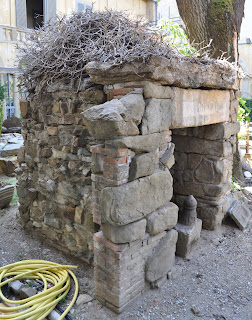 Two views of a  free-standing former interment from Vetulonia.
But everything tomb-like is not necessarily a tomb...  We can also admire an underground receptacle for votive gifts (favissa), lined with monumental stone slabs. It was discovered at Bolsena (in Lazio) in 1904, filled with human and other figures in gold, silver, bronze and fired clay. 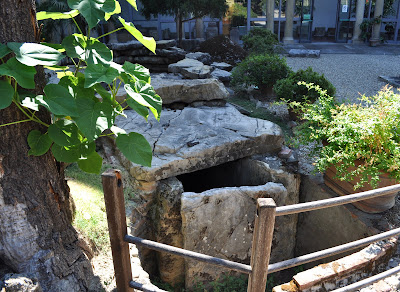 An underground chamber for gifts to a deity
(Third Century B.C.), from Bolsena.
Then, after an hour or two of amiable wandering, we are ready to move on... What do we take with us from this ambiguous Garden of Repose?
It was ineffably beautiful... It was mildly instructive... It was  pleasurably creepy... Especially on bright summer days when all the flowers are out.
And like most museums, it was just a bit silly – packed with strange and wonderful objects meant to be some place else. 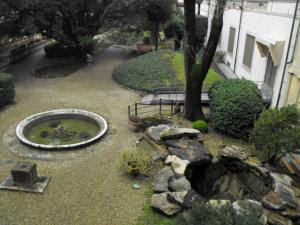 The view from an upper window of the Archeological Museum in Florence; moving clockwise from the upper right, we see the tumulus of the Inghirami Tomb (from Volterra), the open Tomb of the Diavolino (from Vetulonia), the base of a funerary marker (from Populonia) and a modern lily pond. 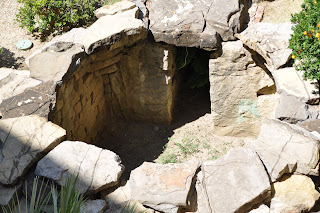 A close-up of the Seventh Century B.C. Tomb of the Diavolino;
it was originally covered with a false dome of overlapping
stone slabs and a tumulus.
More ETRUSCANS?
CLICK HERE!

PLUS: a view of the Volterra (from the Web) and
and three aerial views of Florence (from Google Earth)