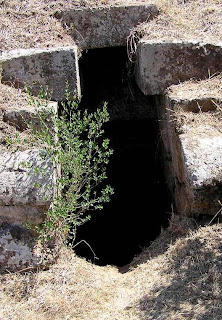 "Crossing the threshold of the cemetery, each of them [the Etruscans of Cerveteri] possessed a second house."

"Inside this house, a resting place was already prepared. And soon, they would be lying down alongside their forefathers."

"Eternity, therefore, was not a vague illusion. Nor a mere fairy tale. Nor an insubstantial promise by their priests." 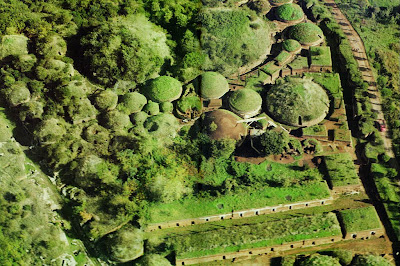 An aerial view of the Etruscan Necropolis of Cerveteri,
showing rounded tumuli, above, and rectilinear chamber tombs, below.

We walk along the streets of this seeming city - popping in and out of tombs. Like casual calls on friends and neighbors, on a pleasant holiday when everyone is home.

We can reach out and touch the Etruscan afterlife - or so we like to think. But this is a laughable impertinence on our part. The perennial license of the living to play fast and loose with the dead. 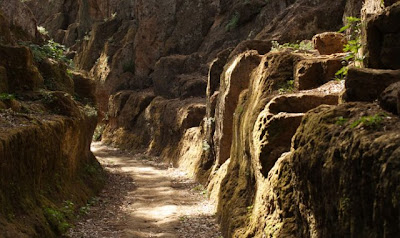 Simple interments in the rock; an excavated sarcophagus
is seen at the right, in deep shadow.

But...the incredible concreteness of it all! For once, the Mysterious Etruscans seem diagrammatically clear.

The by-ways of Cerveteri are combed with simple holes in the rock; the most rudimentary of resting places. We think of squatters in cardboard boxes on modern city streets. 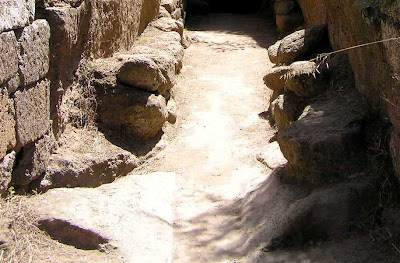 A minimal burial site is seen at the lower left. 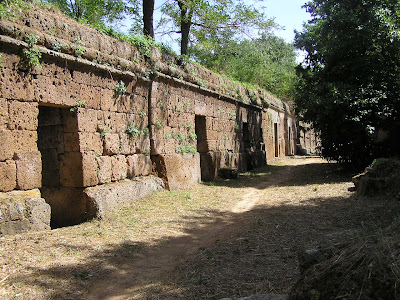 A fine range of chamber tombs, faced with dressed stone, with
bold foundation courses and elaborate moldings at the roof line.


Inside, we see chambers hewn with elegant precision from the native rock. 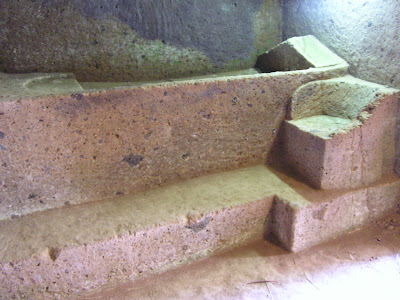 The interior of a chamber tomb; the triangular headpiece
at the right marks a male interment; women
were indicated by semi-circular disks.

Most imposing of all are the tumuli, grassy domes ringed with finished stone... 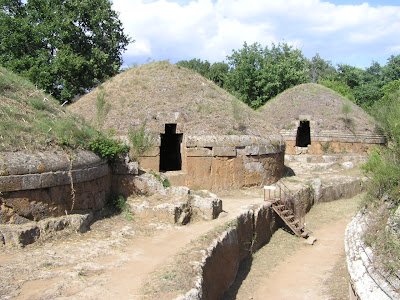 A range of monumental tumuli, evoking the forms
of traditional round houses. 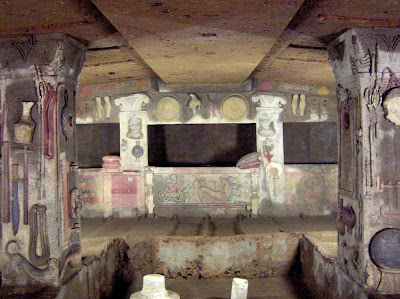 Inside the tumulus of the noble Matuna family.

...lavishly decorated with the appurtenances of aristocratic life. 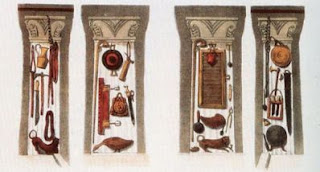 But who were the people buried here?

Terracotta sarcophagus lids from Cerveteri,
in the Villa Giulia Museum in Rome.


We hear that Etruscan society was rigidly hierarchical - and this is the seeming proof. Dominated by the elegant and self-possessed individuals who smile at us from frescoes and sarcophagus lids. Re-enacting the pleasures of their privileged lives. 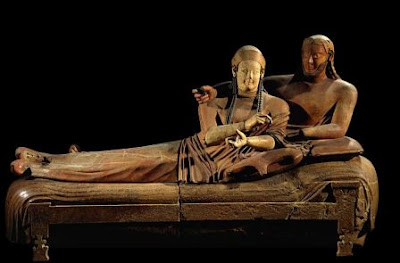 Sarcophagus of the Married Couple from Cerveteri,
in the Villa Giulia Museum in Rome.

At Cerveteri, we see free-standing mansions, comfortable row houses...and mere holes in the ground. But this is a tourist trick that we play on ourselves - reducing history to urban real estate.

In the course of five hundred years (from the Eighth through the Fourth Centuries B.C.), there were periods of greater and lesser wealth and power, evolving social customs and emerging religious beliefs.

And all of these forces shaped the local topography. 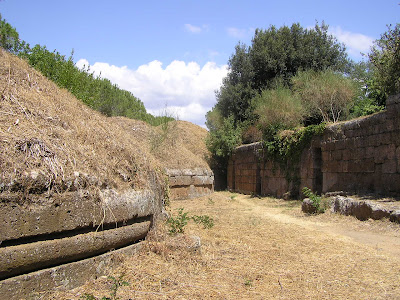 Tumuli encircled by dramatic stonework,
at the left; chamber tombs, at the right.


So, the Etruscans of Cerveteri remain as mysterious as we want them to be. 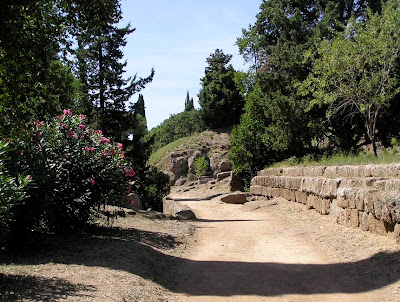 A road leads to an Etruscan tumulus; in the midground,
the round opening to a subterranean burial place;
at the left, a wall of cut stone.

And then we climb back in our cars and drive away - after the inevitable stand-off between the living and the dead. 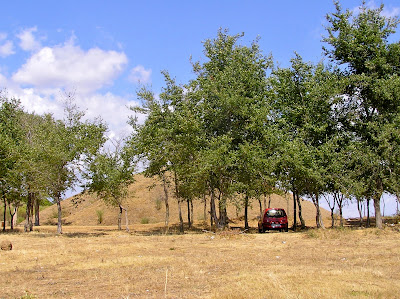 A rental car from Florence, parked in sparse shade near a
massive tumulus outside the main archeological zone. 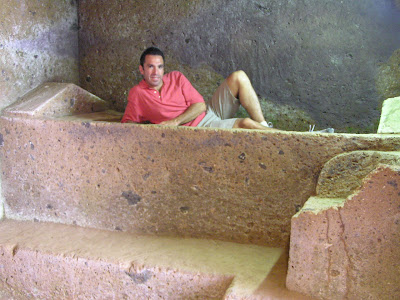 (No mystery here; the camera is on remote control.)