A Row of Fasces
with their illusory message of Strength, Unity
and ultimately, World Domination…

Benito Mussolini borrowed this emblem from the magistrates of ancient , who were accompanied in public by lictors bearing tightly-bound bundles of birch rods, with conspicuously emerging axeheads.

This setting is…or at least was…suitably grandiose. The Foro Mussolini (Mussolini Forum) - a vast athletic complex realized in the Fascist Capital in 1928-43. 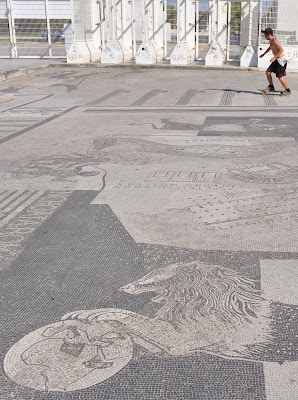 The Duce was never stingy with symbols. And here - in one of the focal sites of his regime - we see a lavish outpouring of imperial imagery.

Ancient Rome...Modern Rome...Ancient Empire...Modern Empire (represented by the tenuous assemblage of Italy, Libya and Abyssinia on the globe beneath the lion's paw.) 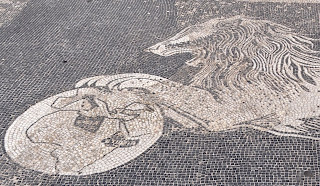 And now, present-day Romans are evolving their own athletic rituals. Taking possession of a strangely alluring past.