Every place and every people has its own creation myth, often invoking the emergence of life from primeval ooze.

In 1924, the noble Caetani family sold 20,000 hectares (nearly 50,000 acres) of malarial wasteland to Mussolini's emerging fascist state, in the Pontine Marshes south of Rome. Meanwhile, they retained the scenic ghost town of Ninfa, which they developed as a private resort. 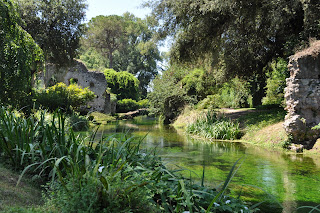 CLICK: Ninfa: People Lived Here
Latina (originally, Littoria), Pontinia, Sabaudia and Aprilia - the four Città di Fondazione ("Founded" or "Invented Cities") - sprang up in only a few years (1932-37), within a few kilometers of each other, on arduously reclaimed land.

New settlements in a country of proud historic cities, they shared a fleeting moment of destiny - for a decade or so, until the end of the fascist regime. And now seventy years later, these places still exist - with a deeply rooted sense of their own anomalous identity.

In 1934, the artist Duilio Cambelloti defined the grandiose vision of his time in a fresco in the chief government building in Latina (the Palazzo del Governo.) An army of superhuman beings claw at the mud with their bare hands while Mussolini's utopia rises in the distance. Their bundled tools form a conspicuous fasces - in case we missed the point...
In 1938, also in Latina, Pasquale Rizzoli rendered this same heroic message in bronze. His Genio della Bonifica ("Spririt of Land Reclamation") was conceived as the civil equivalent of a war memorial, honoring the many who died while realizing Mussolini's bold project. Only a few years later, it was stripped of the usual fascist emblems - but the monument remains and the popular  memory is still fresh.
What would Benito Mussolini have made of the Dryland Pub & Pizzeria in nearby Pontinia - destined (in theory) to become the agricultural hub of its namesake, the former Pontine Marsh? He might have approved of everything except the foreign language, the foreign beer  and the startling lack of people passing in the street. (Unlike , this invented city never quite took off.)

Meanwhile, at the Associazione Sportiva Pontinia (Pontinia Sports Association), the swamp is reclaiming its own - aided and abetted by a rogue sprinkler system.

NOTE: In the back garden of Latina City Hall (Palazzo del Popolo), passers-by are eager to point out a disconcerting bronze statue (featured at the top of this post.) It is the celebrated Donna del Palude ("Swamp Woman"). She certainly looks the part, tearing free from weed-clogged mud...
HOWEVER, this lumbering figure was realized by the sculptress Elisabetta Mayo in Rome in 1923 (before the land reclamation began) and then sent to Latina only some fifteen years later - with the title of Daphne (transforming herself into a laurel tree to evade the amorous advances of Apollo.) But then, the spirit of the place kicked in...and she became Swamp Woman by popular acclaim (while remaining Daphne in all the guide books.)
More MUSSOLINI?
CLICK HERE!
PHOTOGRAPHS:  Views of Latina, Pontinia and Ninfa
© Lyle Goldberg