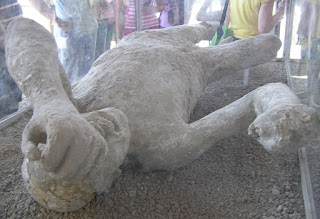 
Pompeii (15 miles east of Naples and 130 miles south of Rome) was an affluent provincial town with some 20,000 inhabitants - and all of the usual temples, baths, theaters, government offices, houses and shops.

It serviced a lush stretch of coastland between Mount Vesuvius and the Gulf of Naples, lined with the opulent summer residences of the Roman elite.

The Palm Beach or the Newport or the Hamptons of Roman Italy...until 24 August 79 A.D. 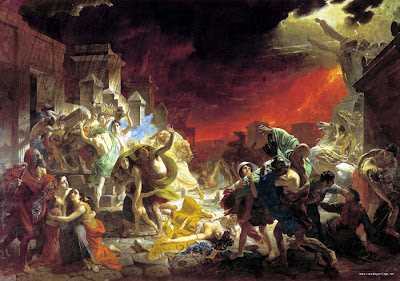 
This fragile seaside paradise was not wiped off the face of the earth but buried far beneath it, under dozens of feet of volcanic ash. The inhabitants had already been killed -  vaporized actually - by blasts of gas reach 250° C.


Pompeii and its  neighbors Herculaneum and Stabiae disappeared from sight and then from mind -  until 1738. Builders in the service of Carlo Borbone, King of Naples, then began turning up beautiful and intriguing if sometimes shocking remains from the rich volcanic soil of local gardens and vineyards. 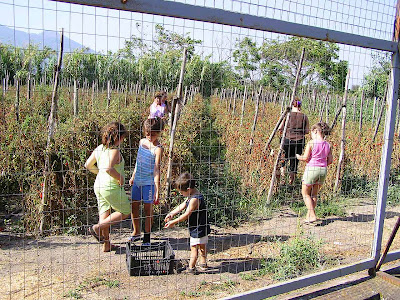 A view from the excavations of Pompeii;
a rural family gathers late tomatoes.

Excavations began ten years later in 1748, stripping away layer after layer of earth and ash. Revealing the intact urban fabric of Pompeii, as it was on the last day of its natural life. 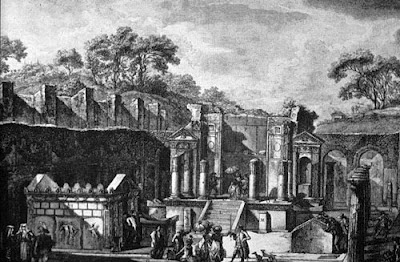 
For two hundred and fifty years, Pompeii has attracted a relentless stream of visitors - from the dilettanti of the Eighteenth Century, to the grand excursionists of the railway age to the mass trippers of today. Two-and-half million tickets to the site are now sold annually to people from every country on earth. 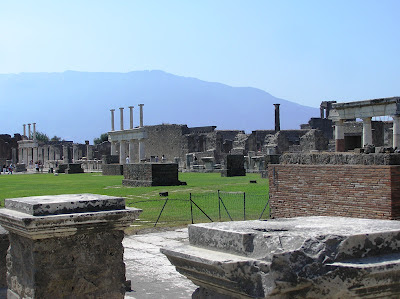 The Forum at Pompeii.

Pompeii is - quite simply - the most famous lost-and-found city in the world. But if we want a direct encounter with the Roman past, we are arriving a couple of centuries too late. 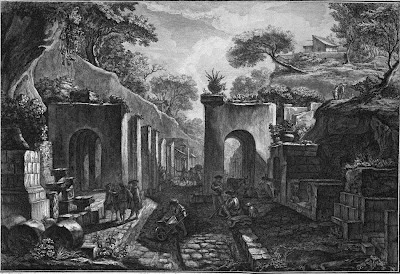 Pompeii has been excavated and restored countless times, then abandoned and neglected and restored again - with archeologists, curators, tourists and even vandals adding new layers of history and meaning. 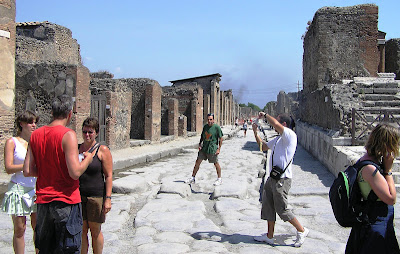 A Pompeian street, with tourists acting like tourists
and Vesuvius still smoking in the background.

And curious visitors, almost any week, outnumber the cumulative total of Roman dead. 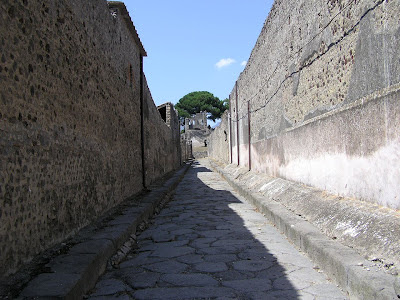 But still, there are sudden silences - even at the height of the summer season. And unsettling encounters off the main tourist routes. 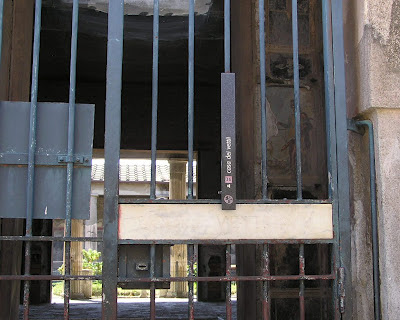 Locked out of the House of the Vettius;
note the frescoed figure to the right. 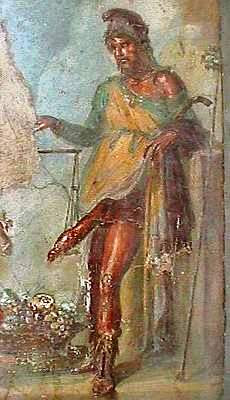 Close-up of frescoed figure to the right. 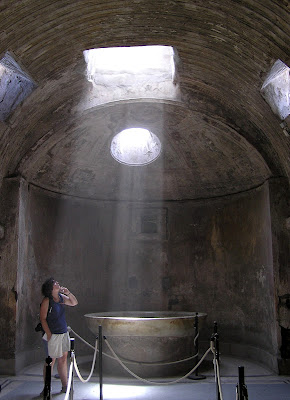 Light falls through an oculus in the bath.

The most astonishing effects, however, were created long after 79 AD. The inhabitants of Pompeii survived as negative corpses, their vaporized bodies preserved as air-pockets in hardened volcanic ash. Giuseppe Fiorelli, an ingenious nineteenth-century archeologist, devised a simple but effective technique - injecting liquid plaster to refill the contours of their vanished forms. 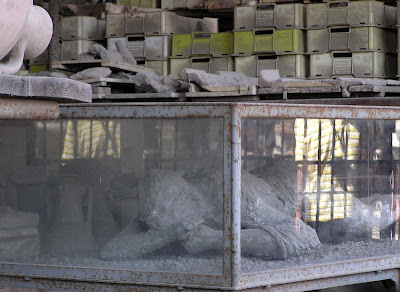 Body cast in a case.

At every turn, we encounter the death throes of nameless beings at three degrees of separation: human body to hermetic vacuum to plaster cast. And now we can add two more: photograph to online publication. 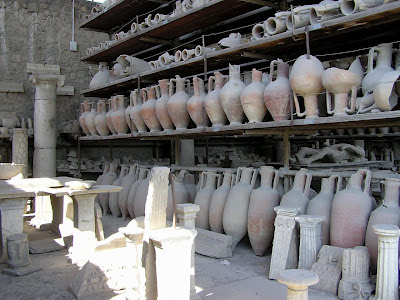 A storeroom in Pompeii; stuff and more stuff. 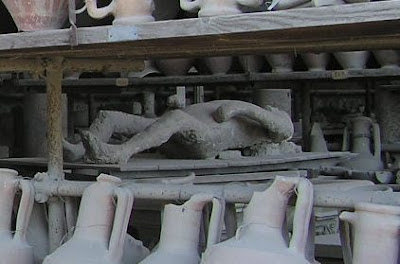 Close-up of a body cast. 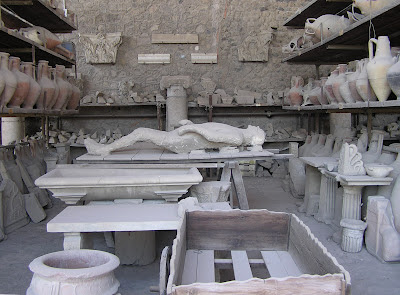 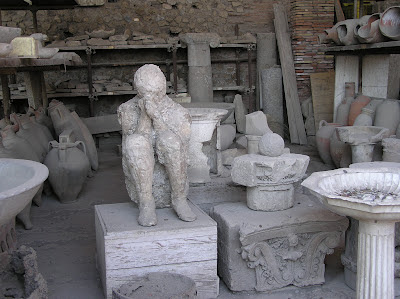 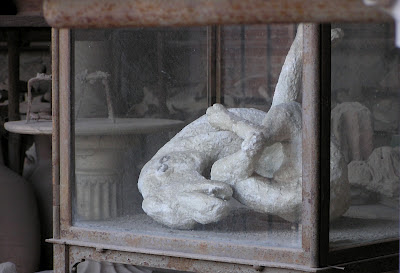 Meanwhile, there is also the inevitable pile-up of places and associations... 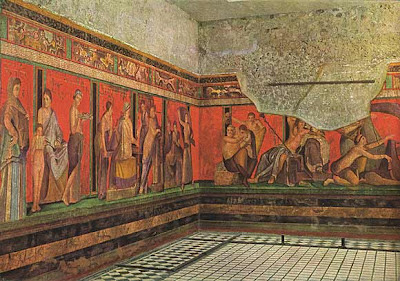 La Villa dei Misteri / The Villa of the Mysteries,
with frescoed scenes of cultic initiation.

Conjured by tricks of light... 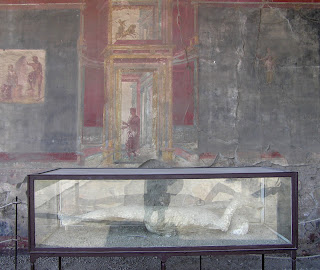 A glass case in the Villa of the Mysteries. 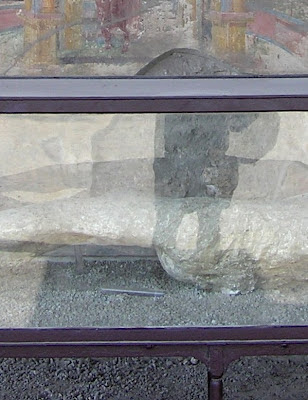 Missing plaster?  Reflection of the Photographer?

The Ghosts of Pompeii? These are just a few... And 79 AD was only the beginning of their story, not the end. 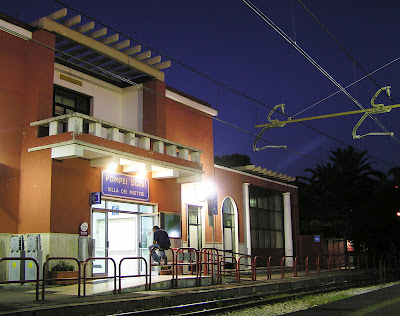 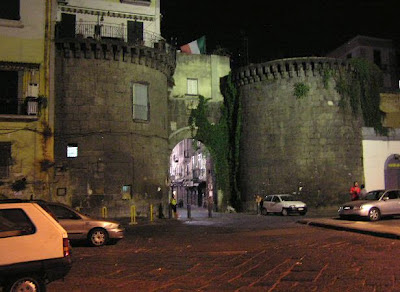