A Day for Hasan... (Melbourne/Florence) 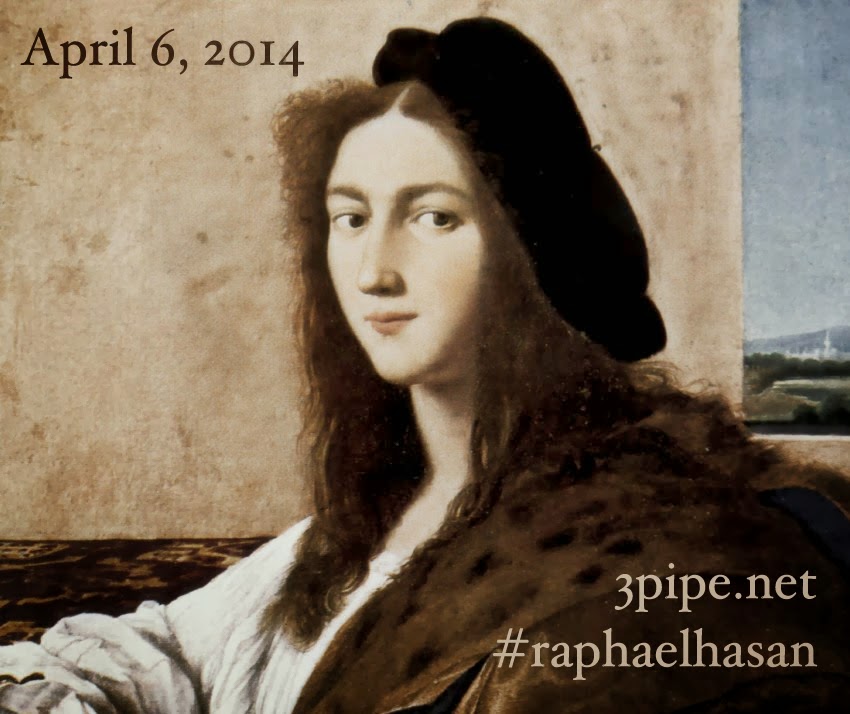 Self-invented rituals are always a little ridiculous - no matter how deeply they might be felt. 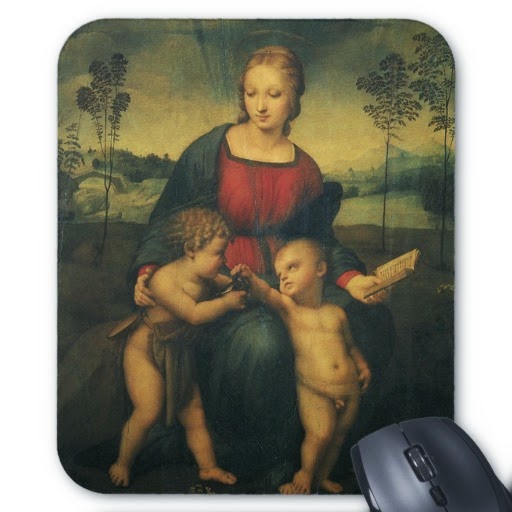 But whenever I see Raphael's Madonna del Cardellino (Madonna of the Goldfinch) in the Uffizi Gallery here in Florence, I always think of Hasan Niyazi and his obsession with this picture.

So, my bright idea for 6 April 2014 (Raphael's Birthday and our Day for Hasan) was to go to the vast gift shop at the Uffizi and buy a mousepad with the Madonna del Cardellino - thereby wrapping up Raphael, Technology and Hasan Niyazi in a neat package. (I still use a mouse and for me a mousepad seems dashingly high-tech.) 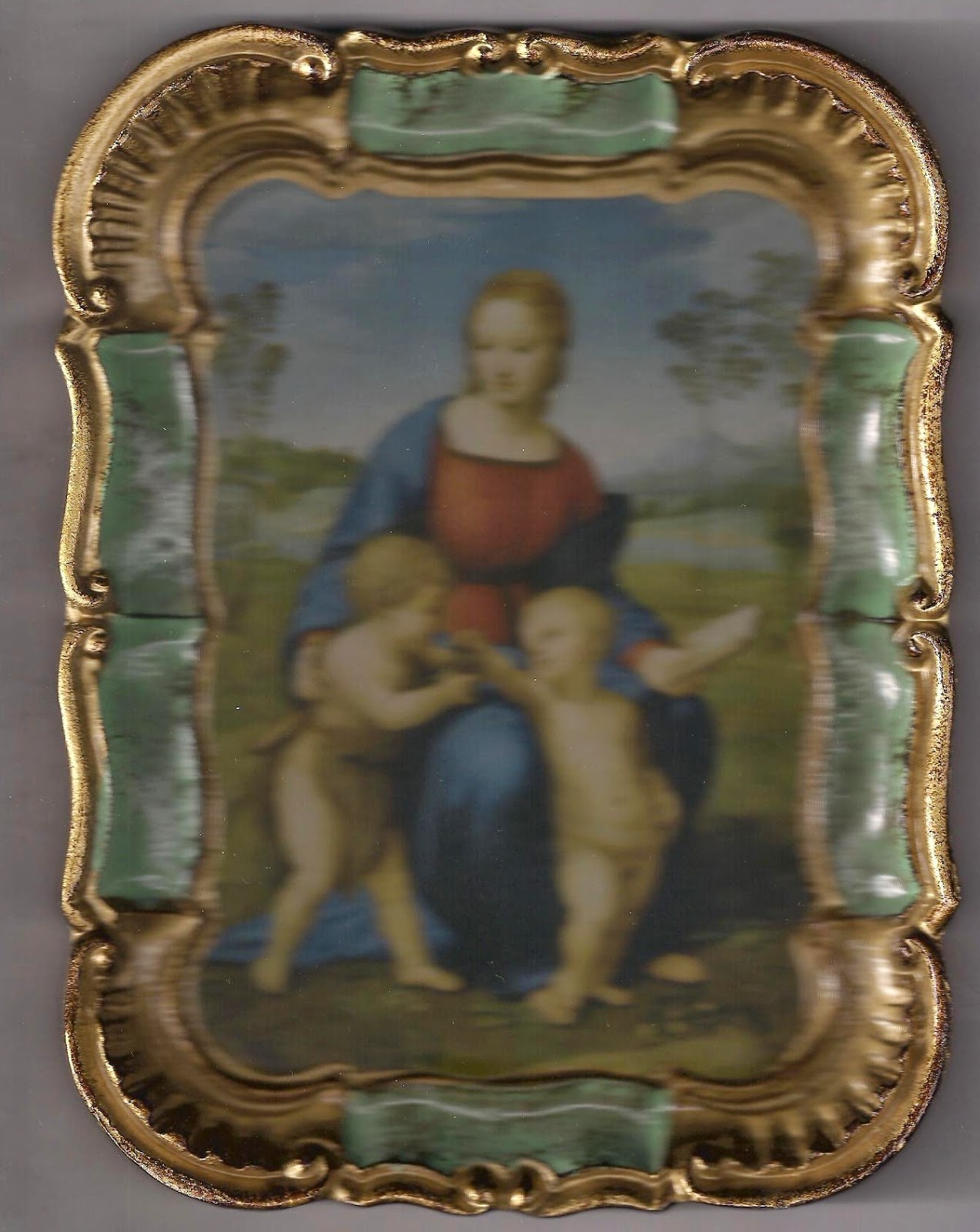 While the Uffizi offers a dazzling array of mousepads, they didn't have the model I required. Sure, I could have ordered one online (like you see above) and had it delivered. But that seemed somehow impure.

So, it was on to Plan B... I bought a  funny little tray. Then Alexandra Korey -  another friend of Hasan's - and I took it out to lunch. 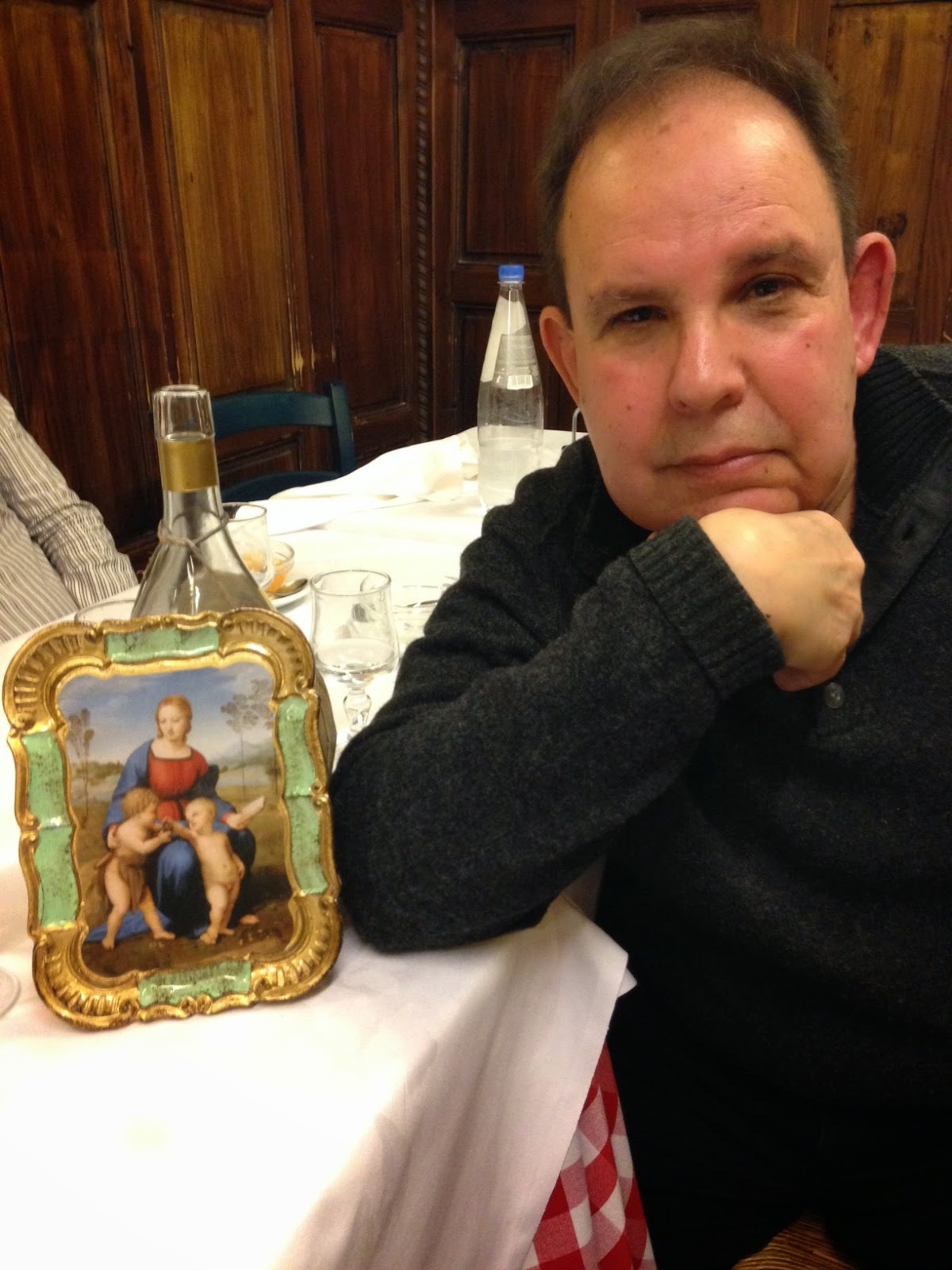 Penseroso at Trattoria Marione in Florence. 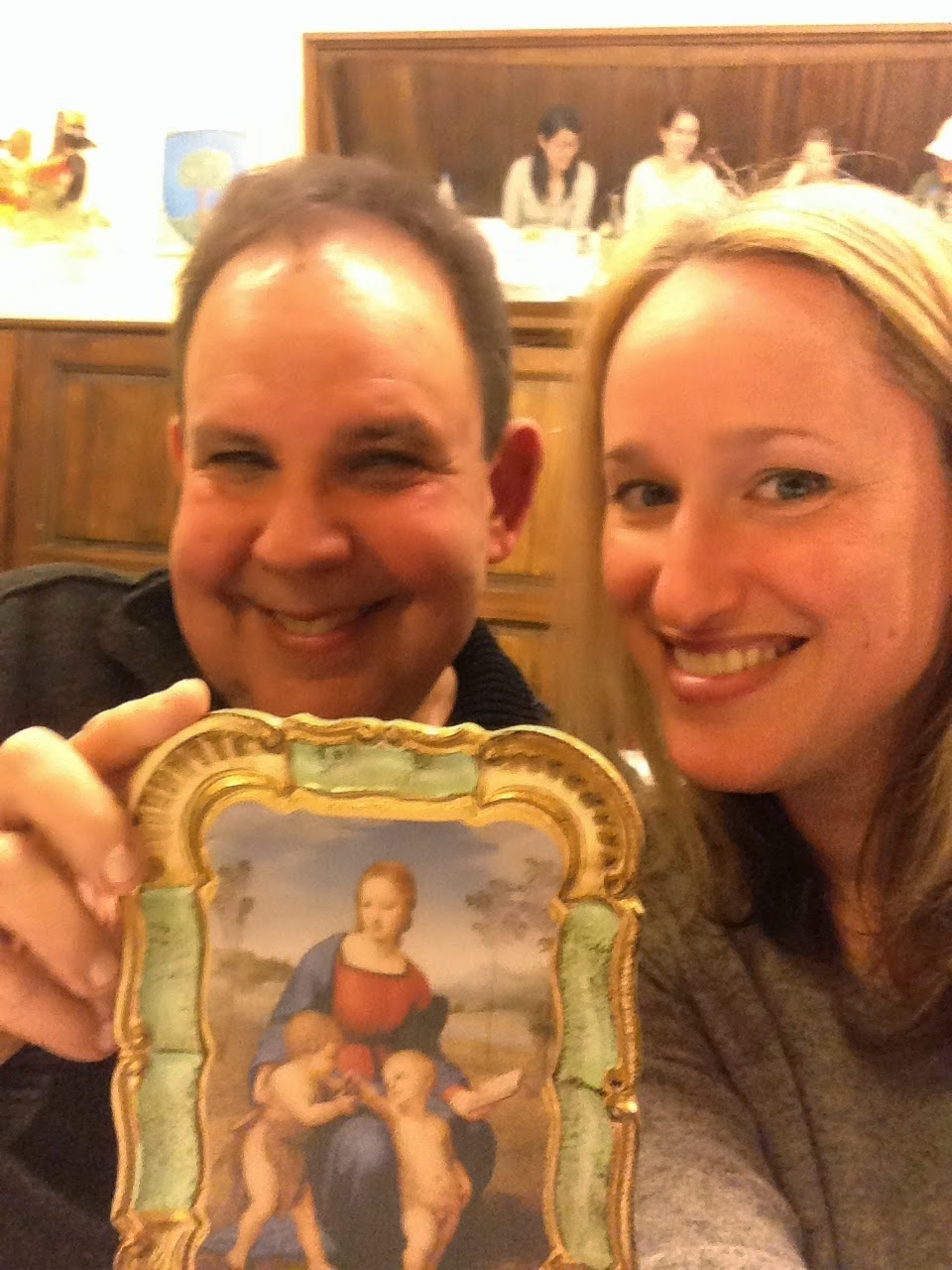 Alexandra Korey and I with Raffaello Sanzio and Hasan Niyazi (in spirit).


But how do we explain Hasan's incredible devotion to the Madonna del Cardellino - and Raphael in general? 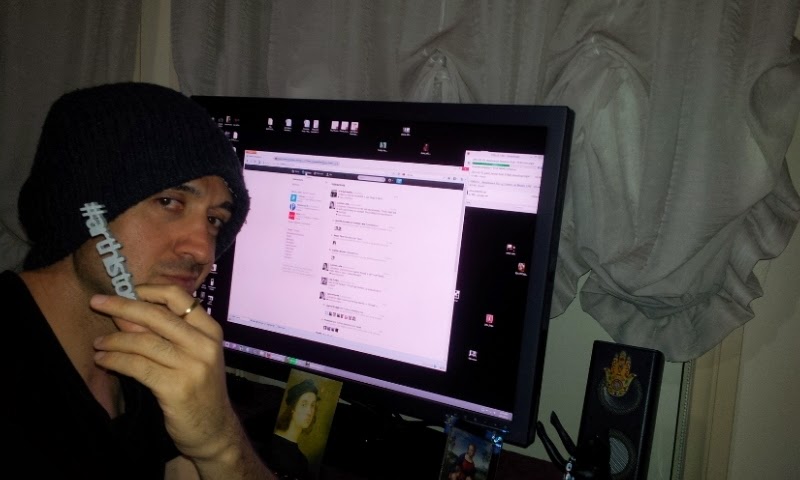 He had the Madonna del Cardellino right there in front of  him in his art cave - along with the youthful Raphael (?) Self-portrait, also from the Uffizi.

For Hasan, gestures like this were never casual. He constantly defined his own identity through images - and shared the latest permutations with others.  And every shift was intensely considered 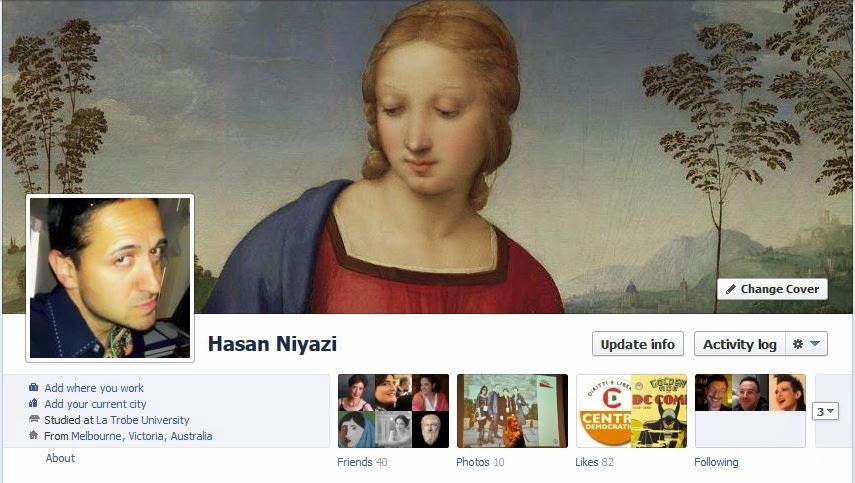 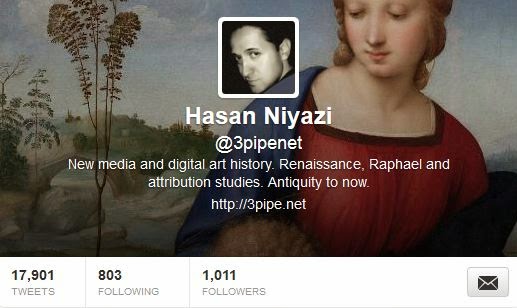 23 February 2013, "Laserbeam Sam* has blended into the Madonna del Cardellino's drapery. I have taken the colour from my own image to perhaps show that I'd prefer the focus be the art, yet there's no ignoring the fact that much of this is about me - also , in a practical sense keeping my pic in colour made it look like a weird mashup."


*"Laserbeam Sam" was one of Hasan's many nicknames for
himself - playing off the fact that he used "Sam" rather
than "Hasan" in his professional life as a physiotherapist.

"Yet there's no ignoring the fact that
much of this is about me..."

That's saying the very least! I didn't go to the Uffizi with Hasan - so we didn't see the Madonna del Cardellino together. This, he insisted, needed to be a private experience - and who was I to argue? (When we went to Rome, I waited for him under the portico of the Pantheon while he paid his respects at Raphael's tomb.) 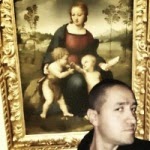 When Hasan came to Florence, he knew that photography was strictly forbidden in the Uffizi Gallery.  So, on 16 August, - well in advance of his trip - he shared his latest creation,  "Ed let me send you this subtle mashup now; it may prevent me from being accused of taking a photo where I shouldn't have." The Granducal decree forbidding building on the Rovinate site after the subsidence
that nearly destroyed the Madonna del Cardellino, on 12 November 1547.


In Florence, Hasan and I visited the site of the Rovinate (The Ruined Houses) - where the Madonna del Cardellino was smashed into seventeen pieces by a landslide in 1547. 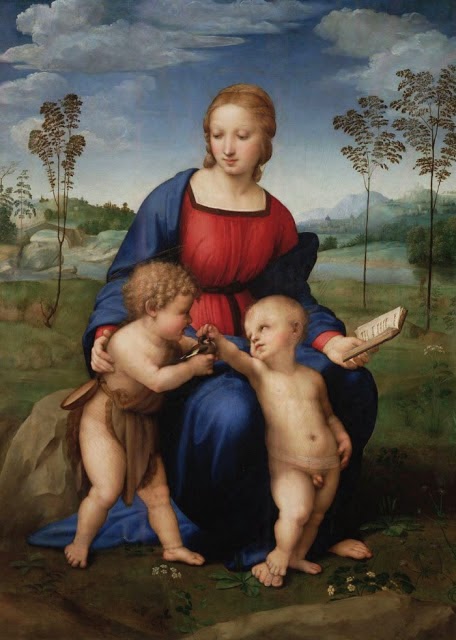 Raphael's Madonna del Cardellino after its
splendid restoration in 2006.

Notwithstanding its tranquil grace and seeming surface perfection, the Madonna del Cardellino has suffered as much as a painting on panel can suffer without being reduced to sawdust and chips. And for Hasan, this was the key to its meaning. 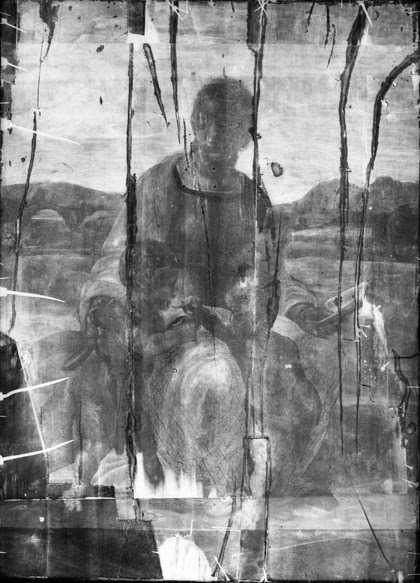 An x-ray of the Madonna del Cardellino, showing the shattering
of the wooden panel and its recomposition in the
sixteenth century with long metal nails.


I will always be grateful that Hasan lived long enough to publish his Madonna del Cardellino entry on Three Pipe Problem - a foretaste of what we could have expected from Open Raphael Online. It appeared on 3 August 2013 (less than three months before his death).


The Divine Rebirth of Raphael's
Madonna of the Goldfinch
Click on title above.

The title itself is startling. And this is the most boldly autobiographical of Hasan's many posts. In talking about the Madonna del Cardellino, he does not pretend for a minute that he is not talking about himself as well. In the first paragraph, he jumps right into his main theme:

Among all of Raphael's great works, his Madonna of the Goldfinch has a strong personal resonance. The wonderfully rich story of its creation, destruction and restoration is representative of all that is possible when talented individuals are dedicated to creating and maintaining an object of great beauty and cultural value.

"Creation, destruction and restoration" was the principal motif of Hasan's absurdly short life, along with "creating and maintaining ...great beauty and cultural value" against daunting odds. 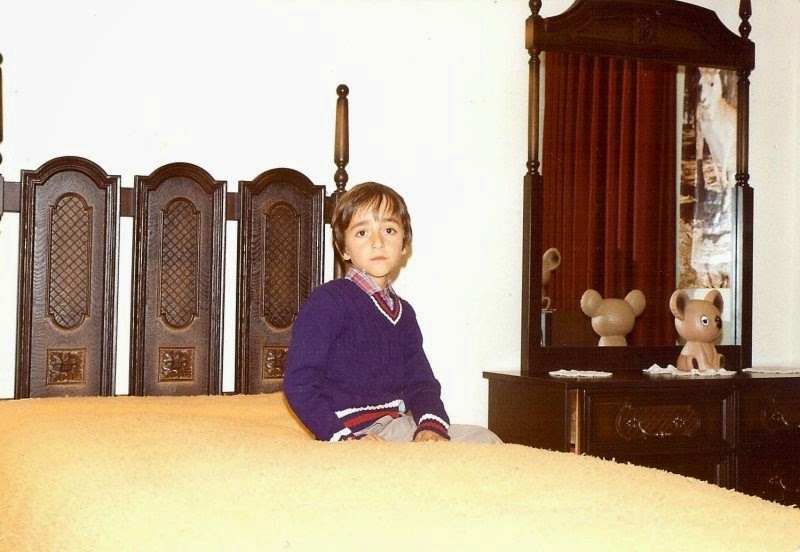 Hasan endured the sort of miserable childhood that most of us only see in movies or read about in books. In later years, he shared haunting "lonely child" photos with his closest friends - silently begging us to ask tough questions so that he could put his experiences into words. 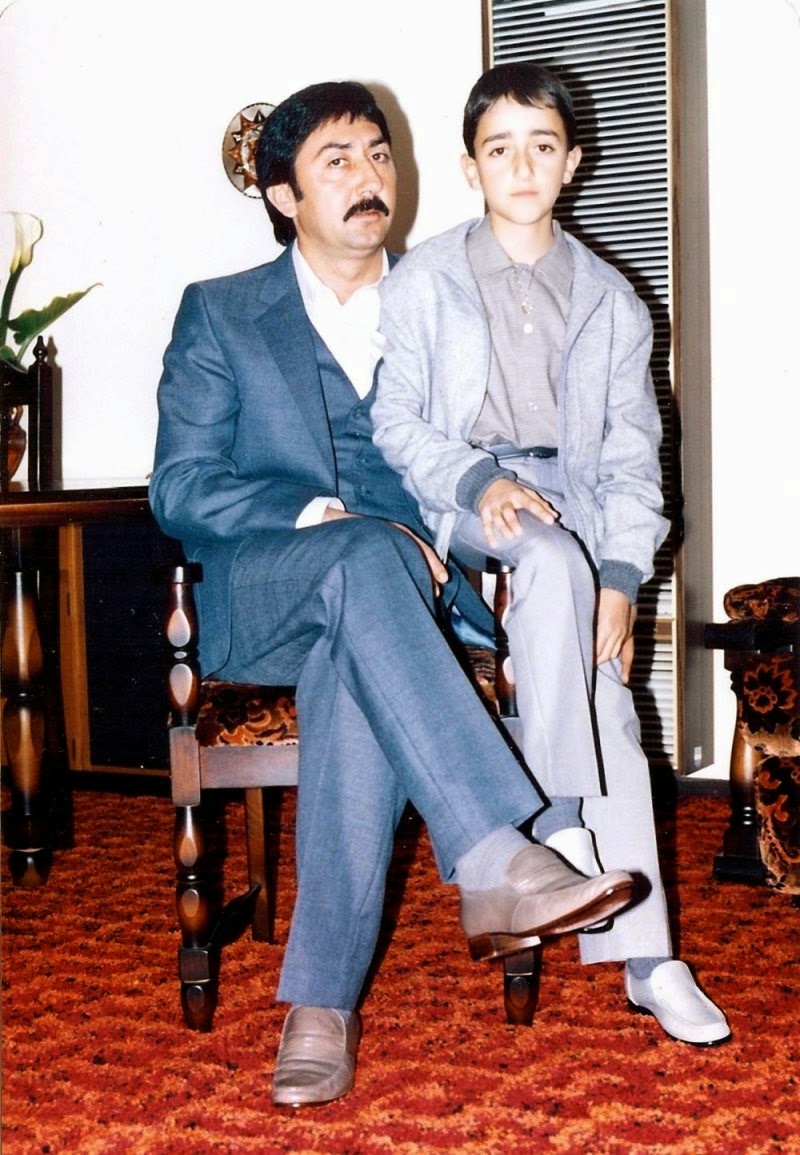 Hasan had epilepsy (that is what ultimately killed him) and those closest reacted as if the illness were a shameful secret and his own fault. Like many emotionally deprived children, he was made to feel both unloved and unlovable - an anguish that he bore until the very end of his life. 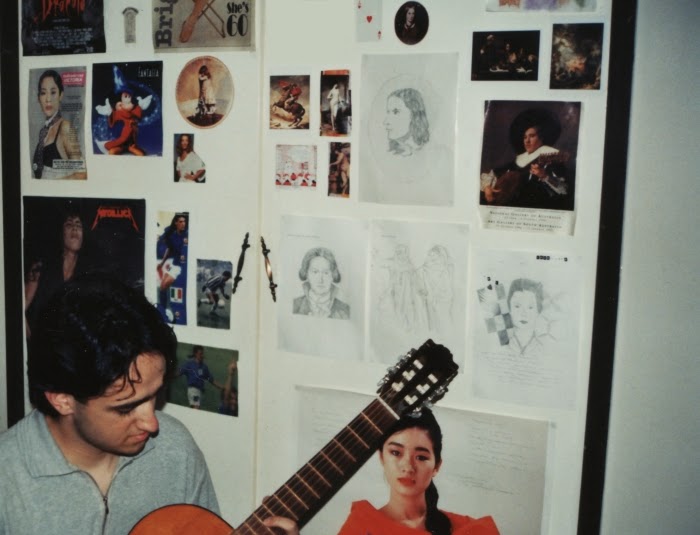 Few have needed to believe as deeply and desperately as Hasan in the transformational power of art and the abiding value of humane scholarship. In his teens, he began constructing his own world of  "great beauty and cultural value". For many long years, this world was strictly private  - and it was never easy for Hasan to believe that other people shared his interests and admired his accomplishments. 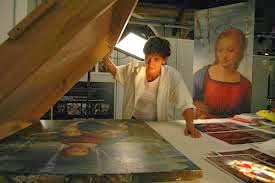 Hasan cites the "divine rebirth" of the Madonna del Cardellino - but as he knew well, this didn't happen over night. For ten years (1999-2008), the picture was away from the Uffizi Gallery, undergoing restoration and study. 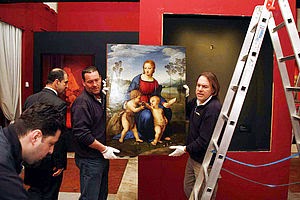 The Madonna del Cardellino returns to its home in the Uffizi Gallery.

Hasan's own rebirth was no less labored - and he died before it was complete. He was just beginning to expand his horizons and even reconnect with his long-estranged family. He moved to a new apartment and threw himself into the absorbing task of rearranging the essential objects that defined  his life. 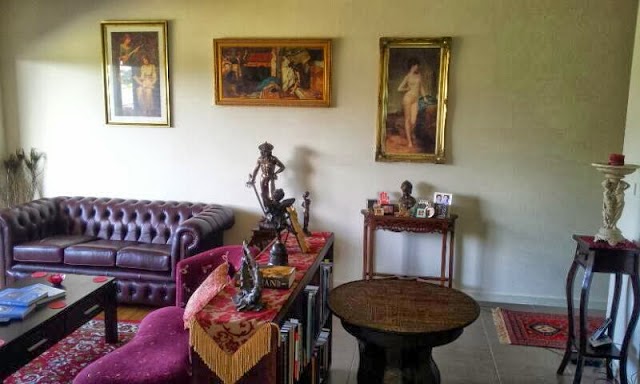 This is where Hasan posted his poignant appreciation of the Madonna del Cardellino.  And this is where Sharon Bishop (his partner of thirteen years) found his body barely three months later. 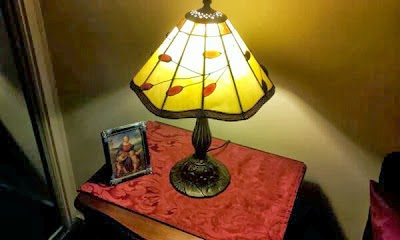 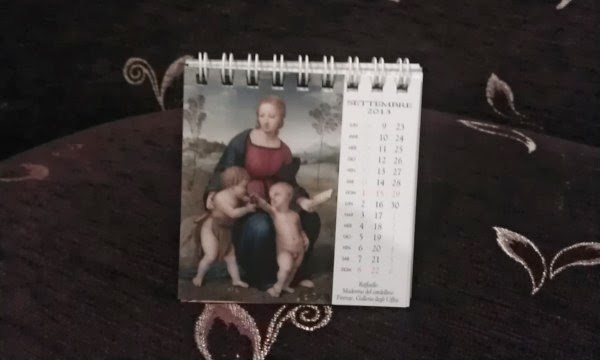 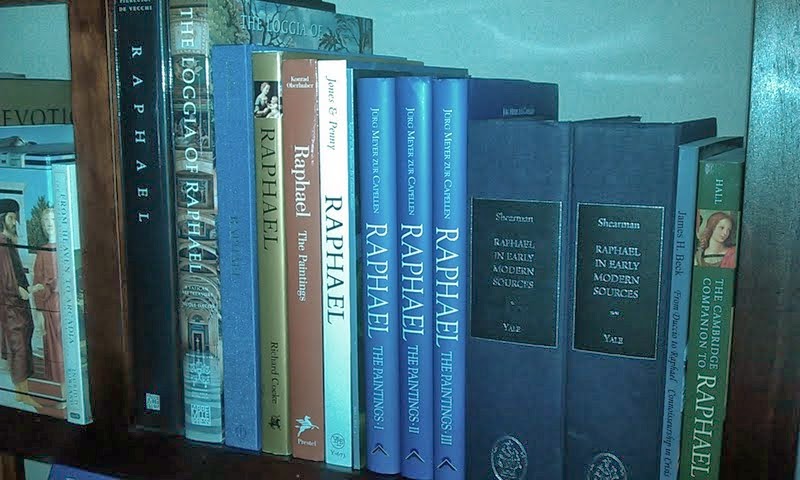 Almost exactly a year ago, two days before Raphael's last birthday, Hasan sent me this note:

I am noting it has been a nice, round, 6 months since I embarked for Florence. Since my return, I can only say that I have a sense of  {?}ambition to do "more",  but there is so much that is missing or needs to be done, that I wonder if I were better off having no ambition at all.  But of course, I don't see these factors discouraging me any time soon, so in the interim, onwards and upwards. 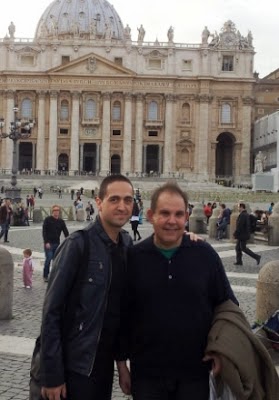 And jumping back even farther, on 16 January 2012, Hasan sent me a semi-whimsical status report on Open Raphael Online:


This may give you a sense of the scale of my upcoming task - not to mention it may give you a giggle... I've made an openraphael bingo card so I can keep track of what I've done... this is how things stand at the moment! Of course remember the 52 scenes from the Loggia are not included, nor the drawings in the image below! I can assure you Ed, I intend to see it through, unless some very dire health calamity befalls me - which I hope does not!