GOING TO THE INDIAN: Part 2 (Florence) 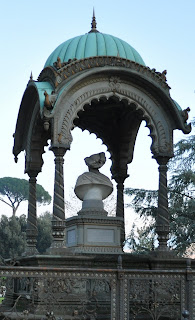 "Andare all'Indiano" = "To go to the Indian"


For Florentines, it means:


"To go to the Farthest Reaches of
the Known World."

"To go to the Farthest Reaches of the
CASCINE PARK on the edge of town." 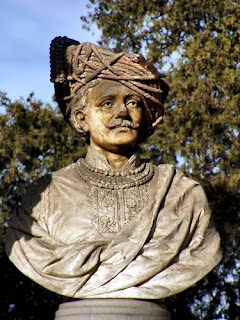 The Portrait Bust of Rajaram Chuttraputti,
before its recent restoration.

GOING TO THE INDIAN, Part 1) 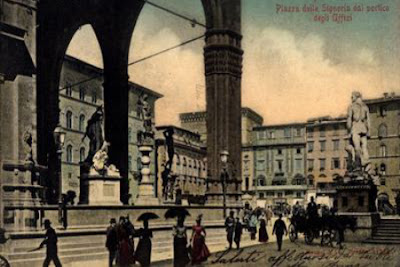 The Piazza della Signoria, from a late
nineteenth-century postcard.


Florence is many wonderful things, but it is also a small, tightly-wrapped town.

There are monumental buildings but few large open spaces - and even the famous piazzas can feel crowded and enclosed.

There are many private gardens - usually hidden behind palace walls - but few public parks.

And (let's be honest about it), there are no grand avenues that really matter, culminating in spectacular views. 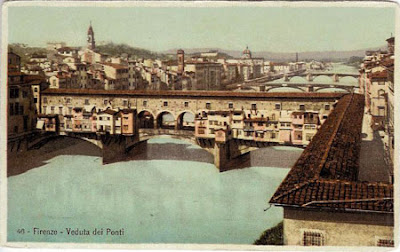 The Ponte Vecchio and , from an
early twentieth-century postcard.


If the did not run through the middle of town, would be one of the most claustrophobic places on earth.

Romans - immediately on arrival - are known to break out in cold sweats, followed by palpitations of the heart and shortness of breath.

So, when locals need to cut loose, the Cascine is the obvious answer - obvious to them, but no one else. 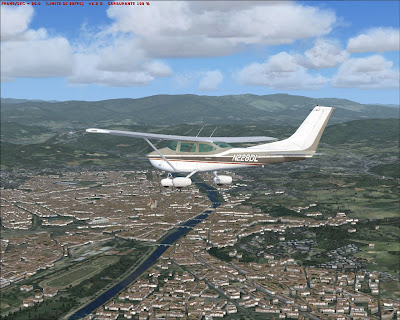 An aerial view of Florence, showing some
two-thirds of the area of the Cascine (in the lower left).


This park extends for three-and-a-half kilometers along the northern bank of the Arno River. From Piazza Vittorio Veneto to the Viaduct of the Indian. "The Promenade of the Cascine: the Avenue of the King
with a view of the Duomo". We see the park in its youth,
neatly groomed, with relatively sparse trees.

﻿
But ferocious beasts guard this land of marvels... 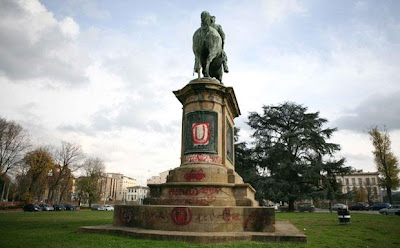 V.E. II, after a spray paint attack in 2009 (not irrelevantly,
red and white are the Peruvian national colors).

King Victor Emanuel II, fiercely moustached, stares us down at the main entrance. (He was exiled from Piazza Vittorio Emanuele II after the War, when it was restyled Piazza della Repubblica). 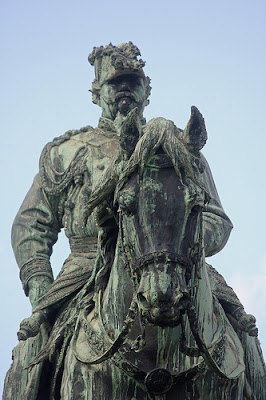 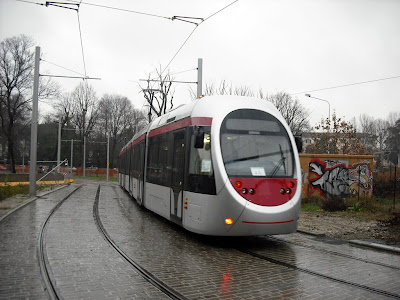 Il Tram, patrolling the periphery of the Cascine.

Once we make the crossing, however, we enter  the most unlikely landscape in all of Florence - with long open views over flat land. 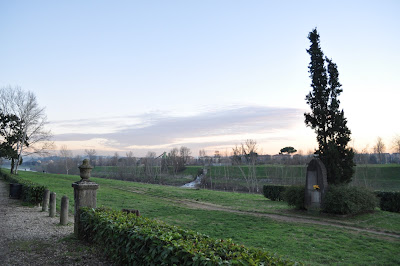 A view along the Arno River on the southern
edge of the the Cascine Park.

The city is built in a narrow river valley in otherwise hilly country. And the Parco delle Cascine clings to the Arno as it flows toward Pisa and the sea. 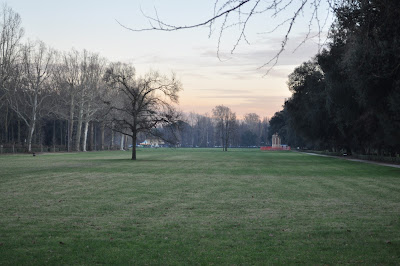 A greensward in the Cascine.

Here - and nowhere else - the sky seems to meet the earth. And we glimpse one curiosity after another out of the corner of our eye... 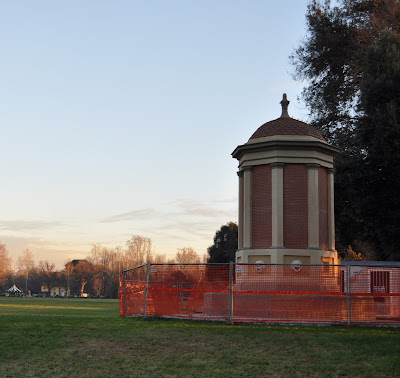 A neoclassical fountain house, under restoration.

...with a veritable collision of fractured elements of the past. 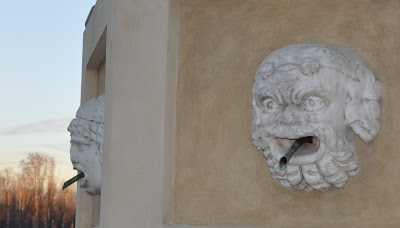 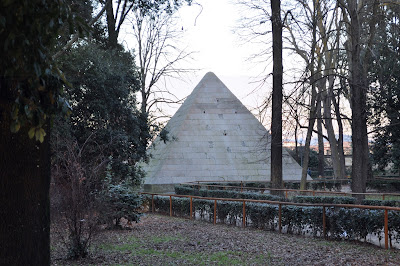 Then, there are the ghosts of bygone pastimes... 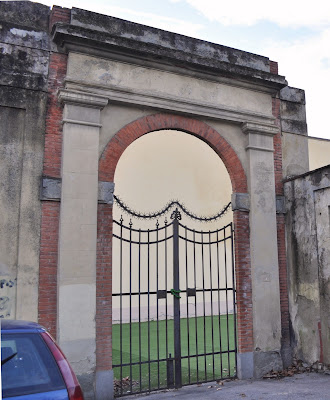 The entrance to the municipal Sferisterio,
from the Greek sphairistérion (sphâira = ball). 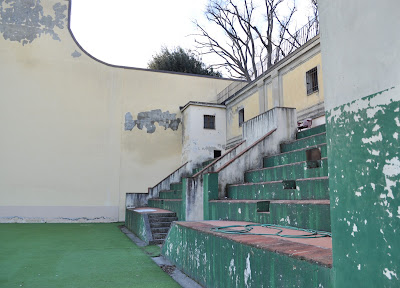 The court was dedicated to an ancient variety of handball,
once favored by the Florentine nobility. 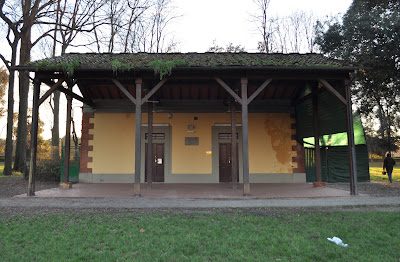 A venerable soccer pavillion, with an
historic marker and an illustrious past. 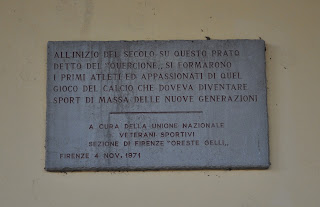 "At the beginning of the century, on this field called the
Quercione (Big Oak), the first athletes and enthusiasts
were formed - of that game of football which was to
become the popular sport of new generations." 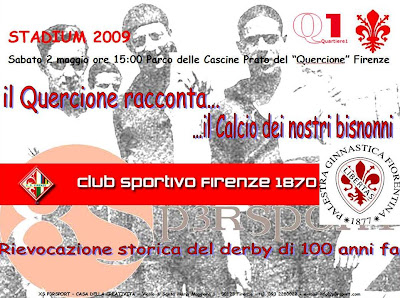 "The Quercione tells its tale...Football as it
was played by our great-grandfathers"

New - and newer - generations have since come and gone...

Football in the Cascine (in late December). 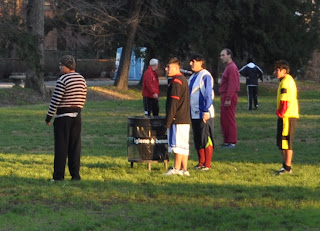 Watching and waiting on the field.

...with customs and traditions of their own. 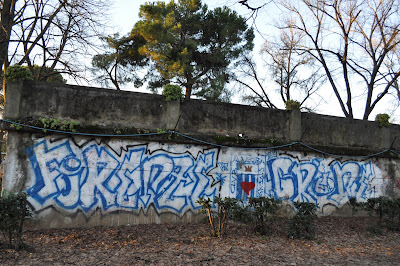 Blue and White are the national colors of four Central American
states (, ,  ),
plus and . 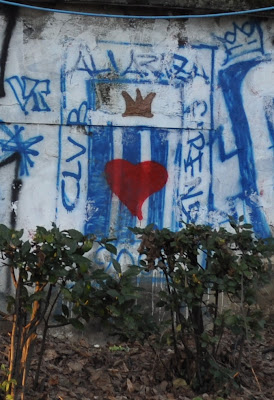 
In the Cascine, however, there is still one inevitable fact - the inexorable pull to the farthest pole. 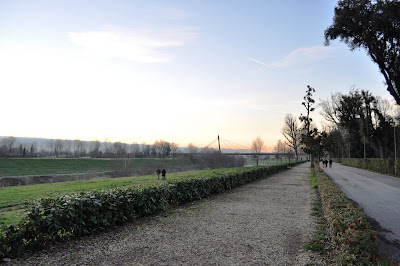 The Cascine: View along the Arno to the
Viadotto dell'Indiano (Viaduct of the Indian). 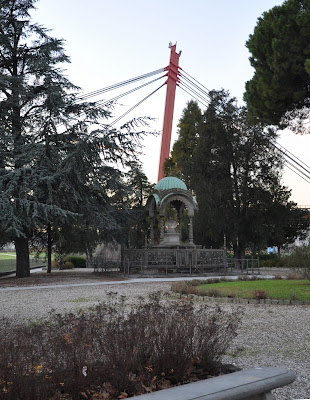 Il Tempio dell'Indiano = The Temple of the Indian 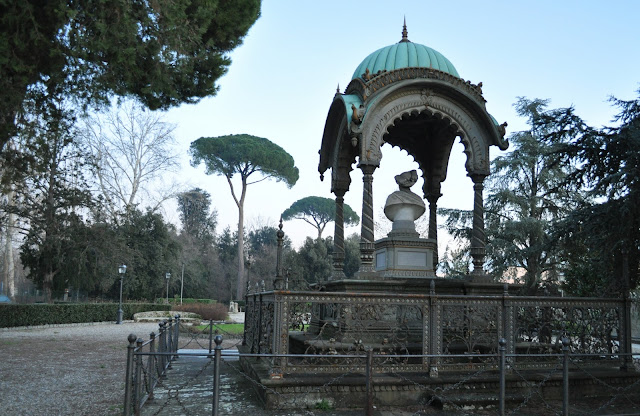 The Temple of the Indian, at the farthest remove of the Cascine,
looking towards Florence.


On the outer edge of the City of Florence.

In a parallel universe of his own.

© Lyle Goldberg
Other photos from the web