A pompous lawyer, a sleazy marriage broker and a Levantine Jew all walk into a bar...


Michelangelo Buonarroti the Younger could have stopped right there. His Florentine audience was already chuckling at this intriguing pile-up of comic stereotypes. 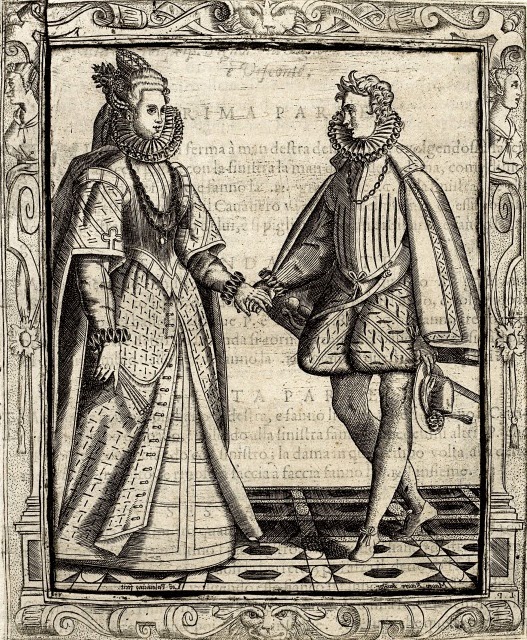 Then toss an attractive pair of clueless young lovers into the mix...

And add a rich old crank (father of the aspiring bride), plus a meddling and gluttonous manservant, plus a saucy maidservant... 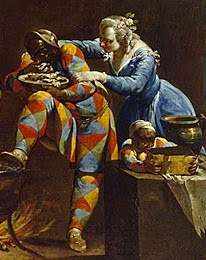 Then stand back and wait for comic hell to break loose - as it surely will. 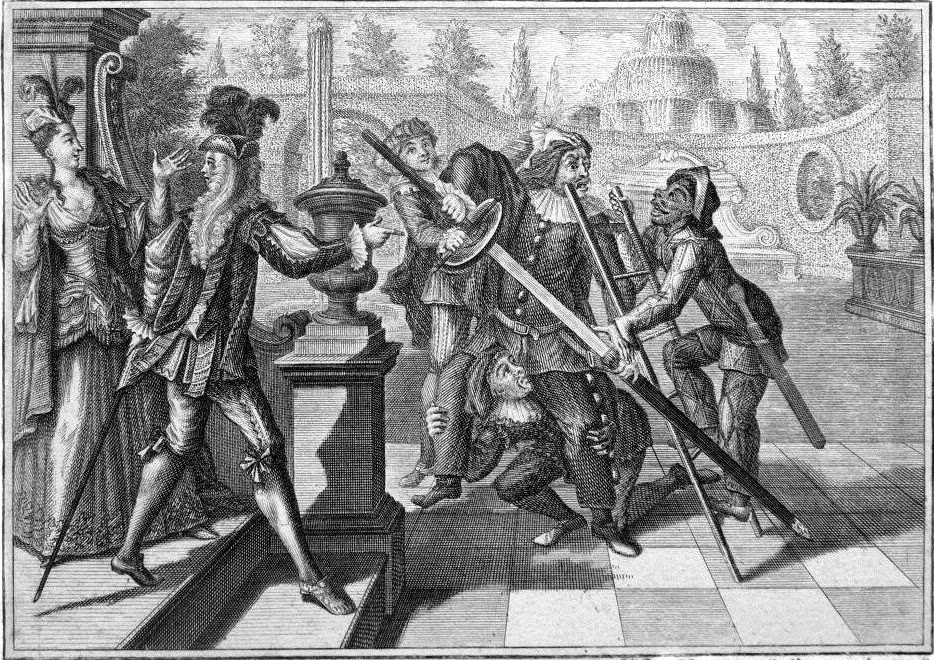 In L'Ebreo, the story takes off in Act Two, Scene 1 - through the machinations of Federigo the marriage broker and Doctor Ambrogio Bordoni, an eminent lawyer and the chief dupe. Meanwhile, Melchisedec the Jew emerges in the title role, as prime mover of the action. 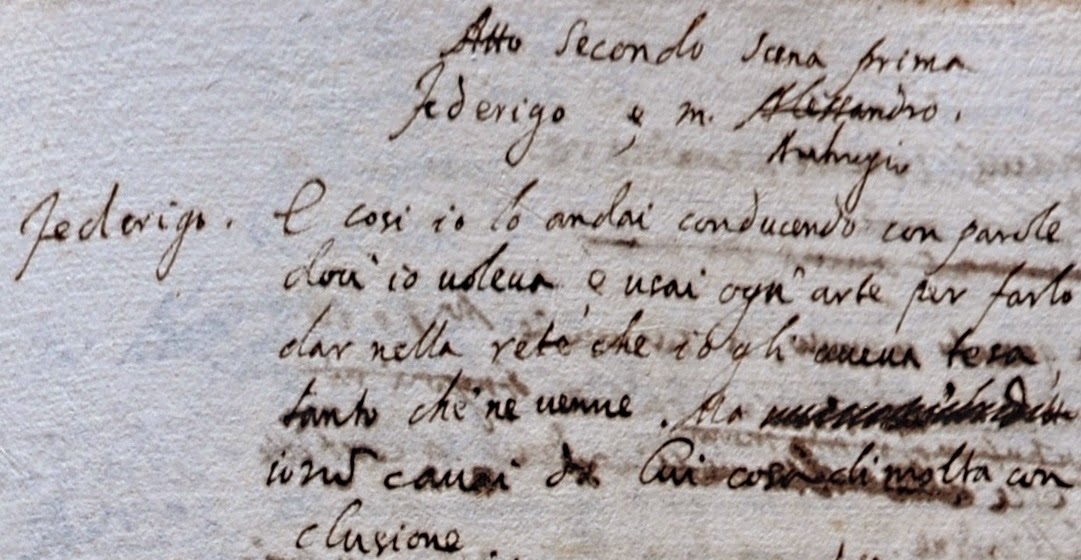 NOTE:  While writing L'Ebreo, Michelangelo
the Younger changed the lawyer's name from
Alessandro to the more portentuous Ambrogio
(invoking a Father of the Church).

Federigo considers the options for disrupting Oretta Tolosini’s engagement to Giovanni Barba, while creating an opening for his client Ambrogio Bordoni—but he is continually frustrated by Bordoni’s self-importance and miserliness.  Federigo proposes an ingenious strategy: he will bribe the Jew Melchisedec to call on Alamanno Tolosini, ostensibly to discuss repayment of the thousand scudi he owes.  Since this money is needed for Oretta’s dowry, it will be easy to shift the discussion to her forthcoming marriage.  At that time, Melchisedec will insinuate false rumors of Giovanni Barba’s bankruptcy in Ancona, leading Alamanno Tolosini to call off the engagement.  Melchisedec can substantiate these allegations by finding an imposter to impersonate a second Levantine Jewish merchant.  This counterfeit Jew will claim to have come from Ancona to Florence specifically to collect a vast debt from the allegedly insolvent Giovanni Barba.

For a full recap of L'Ebreo's story line, see:

THE PLAY'S THE THING

Federigo:  (aside) Enough already!  I talk and talk. I spin lies and deceptions. And this guy—he simply nods his head!  Look, professor, you want a net to fall into?  Here it is, ready and waiting!

Ambrogio Bordoni: There’s just one thing, signor Federigo—you’ll keep my name out of this business, right?

Federigo:  Your name? I forgot it already!

Ambrogio Bordoni:  It would be terrible if anyone suspected me of—well, you know… Especially considering…

Ambrogio Bordoni:  You were there! You talked to Messer Alamanno.

Federigo:  Yes, I was there.  Yes, I talked to Messer Alamanno.  (aside) And I’ve been laughing myself sick ever since!

Federigo:  Giovanni Barba won’t be gazing into Oretta’s eyes any time soon.  Her old man promised me that. And meanwhile, he’s nosing around the guy’s family tree.

Ambrogio Bordoni:  He can nose around all he wants! He won’t turn up a patent of nobility for Giovanni Barba—like mine. Nor a university degree—like mine. 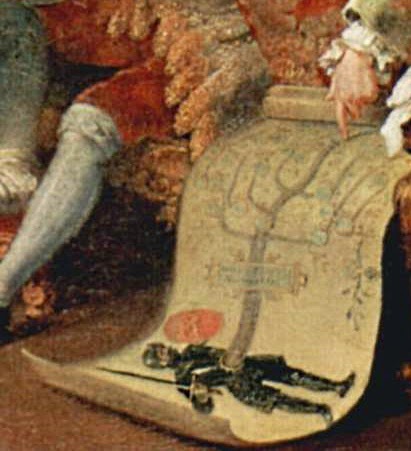 Federigo:  Still, you know how hard it is to snag an eligible bachelor these days. One who is well off, but also—you know—presentable.

Ambrogio Bordoni: You can’t say I’m not well off!  A man of substance!

Federigo:  Substantial, for sure! (Aside) But Riha, Messer Alamanno’s man, has an ounce or two on you, I’d say.

Ambrogio Bordoni:  I wonder at your tone. You can’t be fully informed of my assets.  My holdings.  My resources.  Have you seen my new villa?  Gratia exempli—or id est, as some might say.

Ambrogio Bordoni:  Up, up in the hills.  Above Fiesole. Towards Settignano.  In a locality called “La Cucina”. 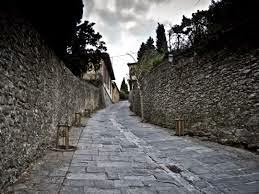 A steep road between Settignano and Fiesole
- certainly not paved in Doctor Ambrogio's day.

Federigo:  Squire! How can you tear yourself away from that lofty retreat?  From that limpid air and sweet repose? Maybe you got tired, dragging your substance up and down all those hills?

Ambrogio Bordoni:  And just beyond, I own a farm at Montesenario.

Federigo:  Your lordship! A whole county is yours to command.

Ambrogio Bordoni:  Then I possess yet another farm, out towards Monte Morello.

Federigo:  Another farm! You are rich, rich, rich! 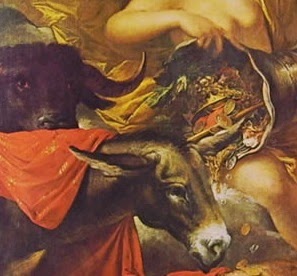 Ambrogio Bordoni:  I have a thousand scudi in the Mangioni bank.


Federigo:  I can believe it.

Ambrogio Bordoni:  And five hundred scudi in the Vannucci operation.

Ambrogio Bordoni:  Plus all that I earn from my legal practice.  You can’t imagine!

Federigo:  A lawyer pulls in money?  Who needs imagination? (aside)  Dear God, this is going nowhere fast. 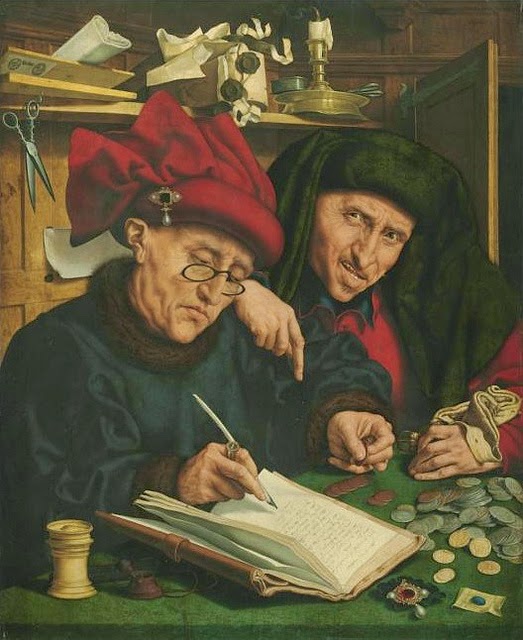 Ambrogio Bordoni:  Just don’t use my name in public.

Federigo:  I hear you!  We need to make everyone swoon over Ambrogio Bordoni’s substance, nobility and university degree—without uttering the magic word, “Ambrogio Bordoni”!  Fortunately—for your sake—I have another scheme in the works.

Federigo:  Can I whisper two words in your ear? “Dirty” and “Trick”.

Federigo:  Close your eyes! Can you see a rich old fart bestowing his only child on some beggar in the street?  What if Messer Alamanno thought Giovanni Barba was flat broke?  Stripped to his skin?  Without a soldo to his name? 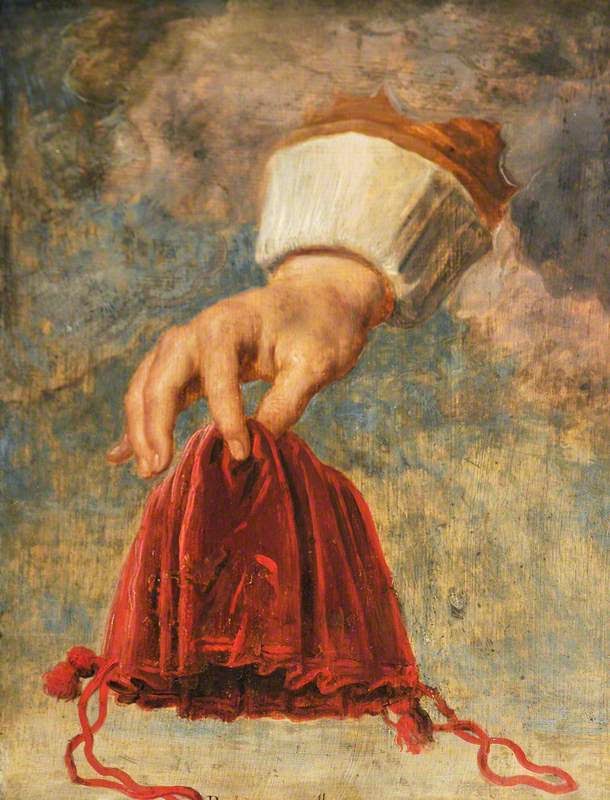 Ambrogio Bordoni:  Stripped to his what?

Federigo:  You can thank Messer Alamanno himself for that idea! Right now, he’s beating the bushes to make Oretta’s dowry, calling in every marker he has.  And that Jew Melchisedec owes him big. A thousand scudi for trade goods.

Federigo:  So the bill is due! That Jew is a friend of mine—and if he wasn’t Jewish, you might almost mistake him for a good little Christian*.  Melchisedec is always happy to do me a favor, since I send a lot of business his way

Ambrogio Bordoni:  I can imagine! The usual Jewish fakes and Jewish frauds and Jewish swindles!

Federigo:  We do what we do—and he is grateful.

Ambrogio Bordoni:  So, now what?

Federigo: So, now I need to talk to Melchesedec, face to face… 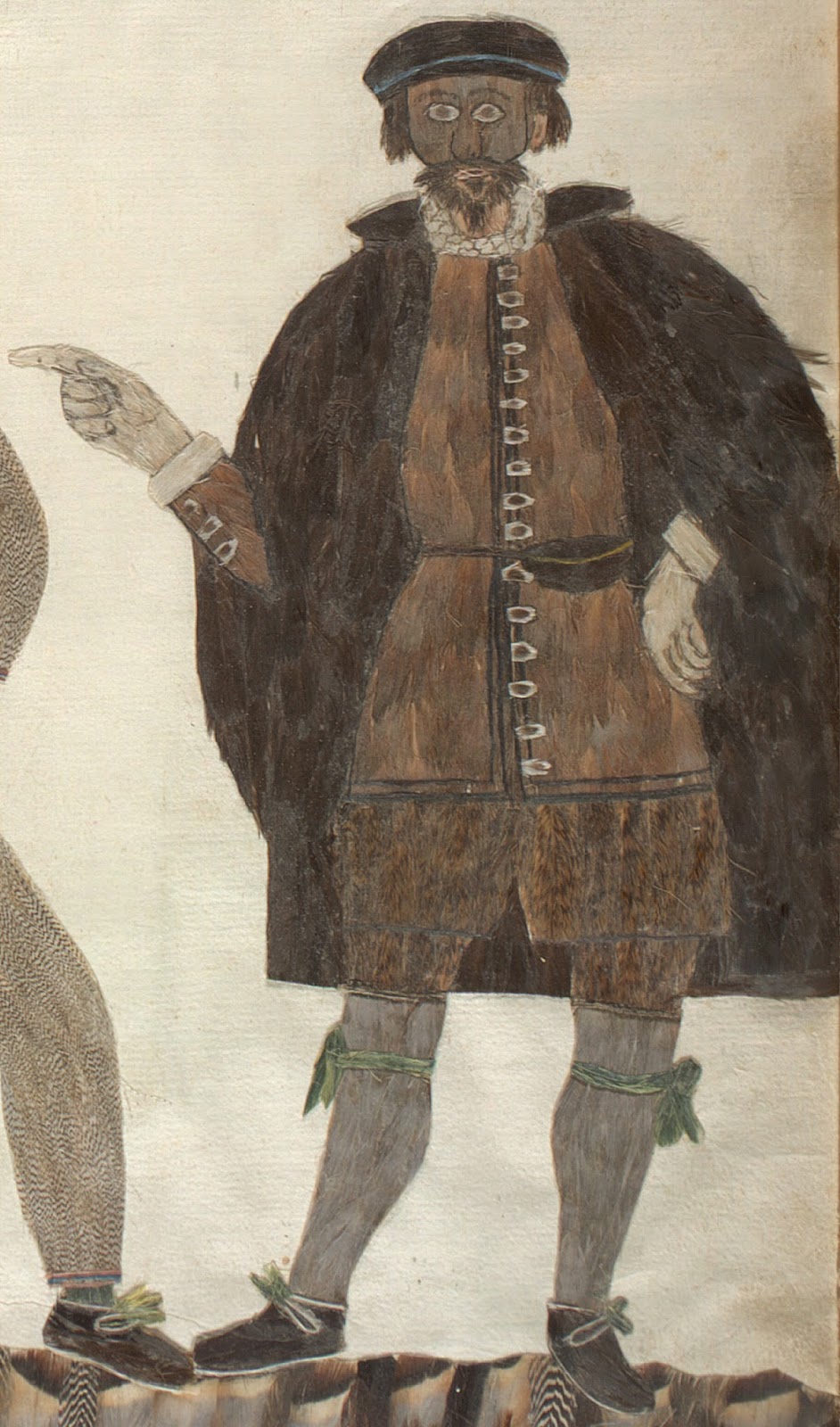 Federigo:  All we need is an opening. Any opening. Then I’ll take it from there. But the Jew won’t do anything for the love of God.  So, plan on spending some money.

Federigo:  Only if you want to wreck Giovanni‘s engagement.  Melchisedec has to repay the thousand scudi sooner or later.  But he can always make excuses and invent delays—if you slip him twenty-five scudi.

Federigo:  And don’t be miserly, Your Excellency!

Ambrogio Bordoni:  But twenty-five scudi… I don’t earn that much in a week.


Federigo:  Funny how rich you were, only a few minutes ago!  Just roll up your sleeves and dive into your law books.  You’ll find plenty of cash there.

Federigo:  And then—believe me—the Jew will take it.  But when Melchisedec goes to see Messer Alamanno, he can’t go alone.  We need to find another Melchisedec.

Ambrogio Bordoni: Another what?!

Federigo:  Someone, anyone, who can pass for a Levantine Jew.

Ambrogio Bordoni:  And then?

Federigo:  He tells a lie.

Ambrogio Bordoni:  That’s not much for twenty-five scudi!

Federigo:  The Jews arrive.  The real one and the fake one.  Messer Alamanno hits Melchisedec for his money.  Melchisedec turns to his sidekick, “Listen up, oh brother of mine! The fine Christian gentleman wants to be paid!  Now, you pay me—so I can pay him.”

Federigo:  Jew number two replies, “Oh, Melchisedec! Behold! I am hot on the trail of an infamous bankrupt.  Lo, he cut and ran from Ancona, owing me six thousand scudi.  I’ll pay you, the instant he pays me. Guy’s name is Giovanni Barba.”

Ambrogio Bordoni: I get the picture! 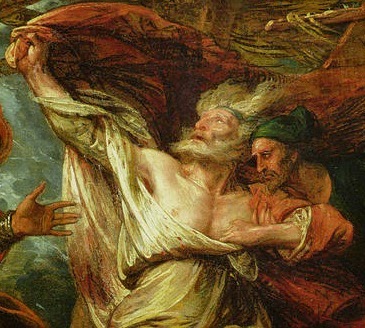 Ambrogio Bordoni:  But what happens later, when he learns the truth?

Federigo:  By the time Messer Alamanno stops clutching his chest, the second Jew will have disappeared.  How difficult can that be? He wasn’t a Jew to begin with!

Ambrogio Bordoni:  Beautiful!  A work of art!  Oretta is already in my arms.

Federigo:  She’s not there yet!  First, let’s find a fake Levantine.  And—of course—the pay-off for Melchisedec.

Ambrogio Bordoni:  I’ll take care of the money.  But when it comes to Turkish Hebrews and Hebrew Turks…

Federigo:  Don’t worry! Florence is full of people who are more like Jews than Christians.  Let’s try those hole-in-the-wall taverns where charlatans and hucksters and buskers hang out…  But wait!  This is Carnival!  Just walk out the door and we’ll trip over masqueraders of every size, shape and color.  We might even stumble on a real Levantine Jew!  Wouldn’t that be nice? 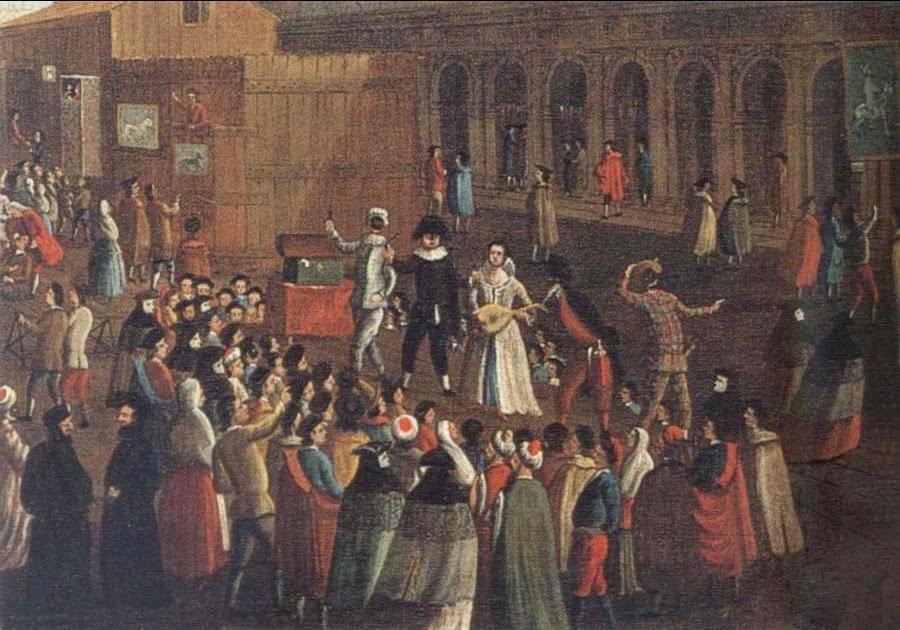 
Ambrogio Bordoni:  Oh my dearest Federigo! You are a
prince among men!

Federigo:  And a man among princes!  But now, I need to track down Melchisedec.

Ambrogio Bordoni:  Where do you start?


Federigo:  The customs house.  He always has a deal in the works.  But now, you need to lay your hands on twenty-five scudi.

Ambrogio Bordoni: Oh, Lord!  What a price we pay, when we fall in love with other men’s daughters! 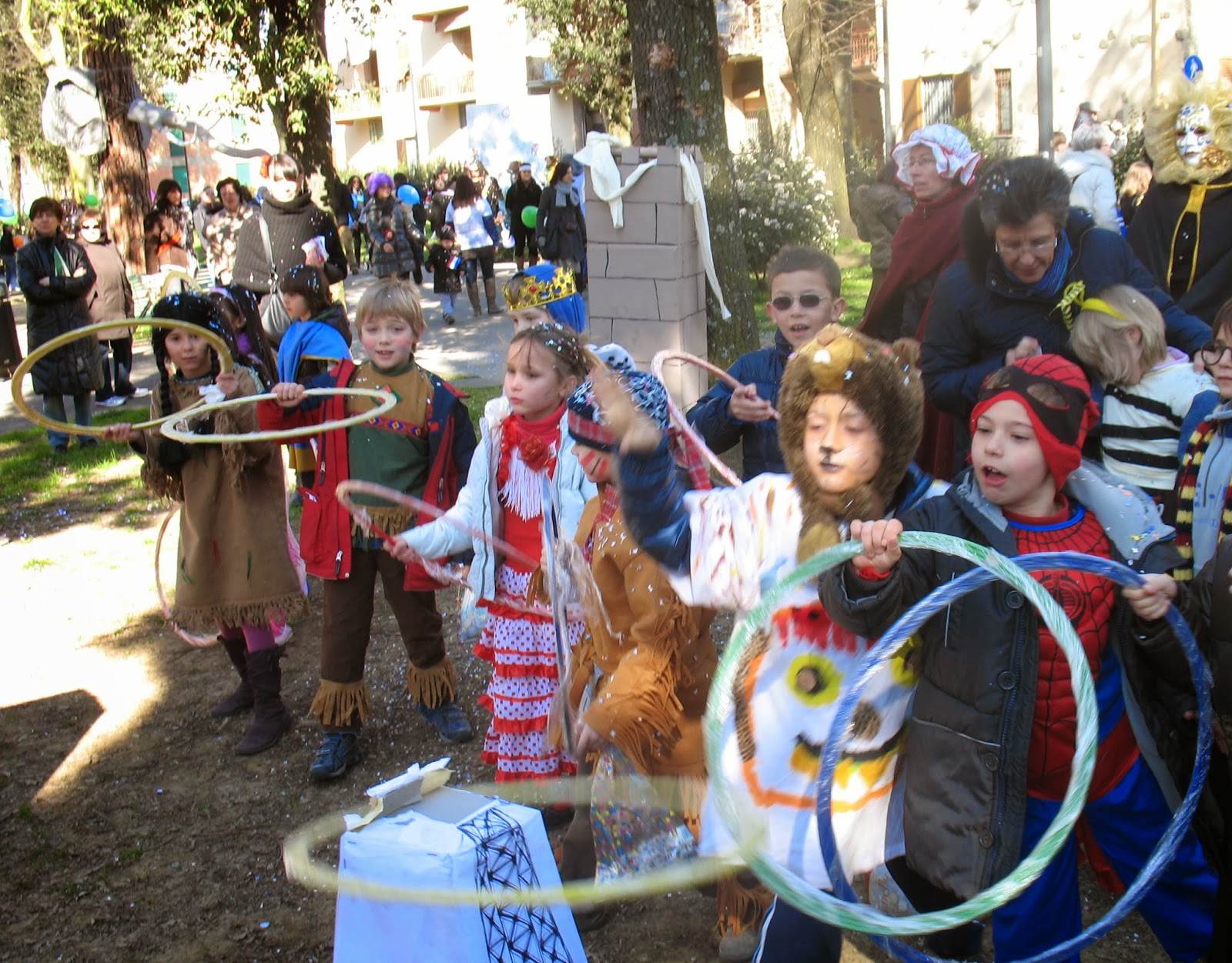