"THE JEW": THE PLAY'S THE THING 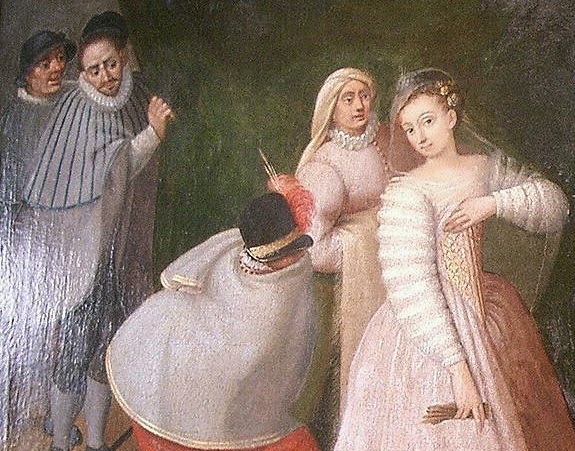 "Wow! That stuff is crazy enough to be Shakespeare!"

I was spinning the story line of L'Ebreo / The Jew to a usually sympathetic friend. So I was taken aback - but I had to admit that she had a point.

There were sixteen characters running around on stage,  tripping over each other's feet. Heedless young lovers... A jealous rival... Interfering parents... Scheming servants... Bumbling police...And so on...

Plus - astonishingly enough - a Jew in the title role. Not to mention a hapless Christian impersonating a Jew (and making a comic mess of it). 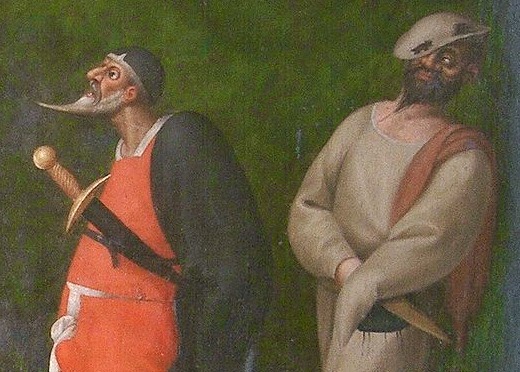 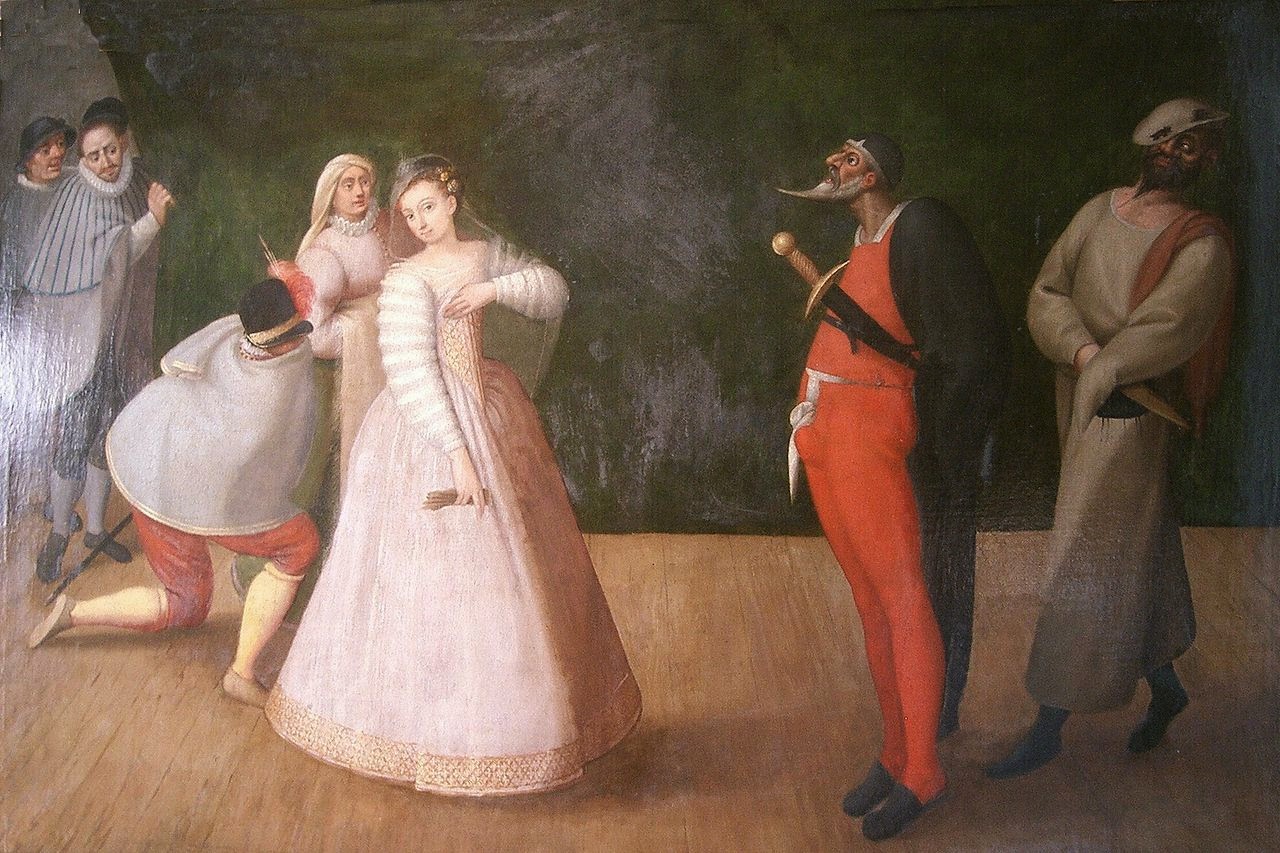 The actors of the Compagnia dei Gelosi, circa 1590, starring Isabella Andreini.
The Gelosi were among the most sophisticated and accomplished proponents
of the Commedia dell'Arte  - which strongly influenced Michelangelo
the Younger, especially in L'Ebreo / The Jew.


L'Ebreo / The Jew is intensely Florentine in its language, its local references and its brand of humor. So, we're looking at lively caricatures of the folks next door - if you happened to be living in the Medici capital around 1600.

Here's the story, accompanied by some period  images... 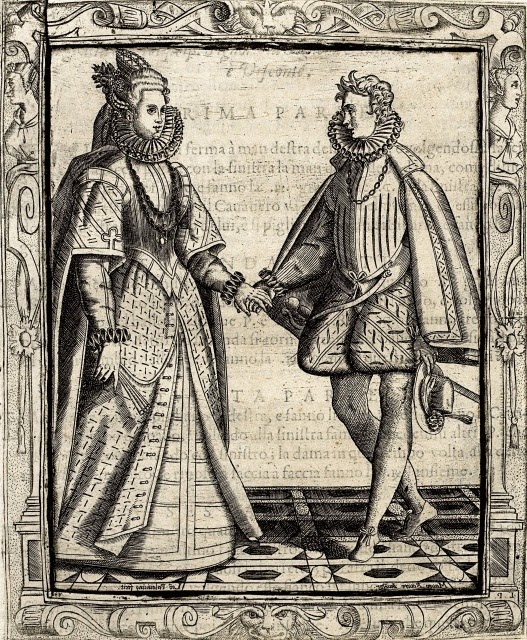 Giovanni Barba, a spirited young Florentine businessman, has recently returned home after making his fortune in the port city of Ancona. Giovanni has contracted a seemingly ideal marriage with Oretta, the charming daughter of Alamanno Tolosini, an elderly merchant with aristocratic pretensions 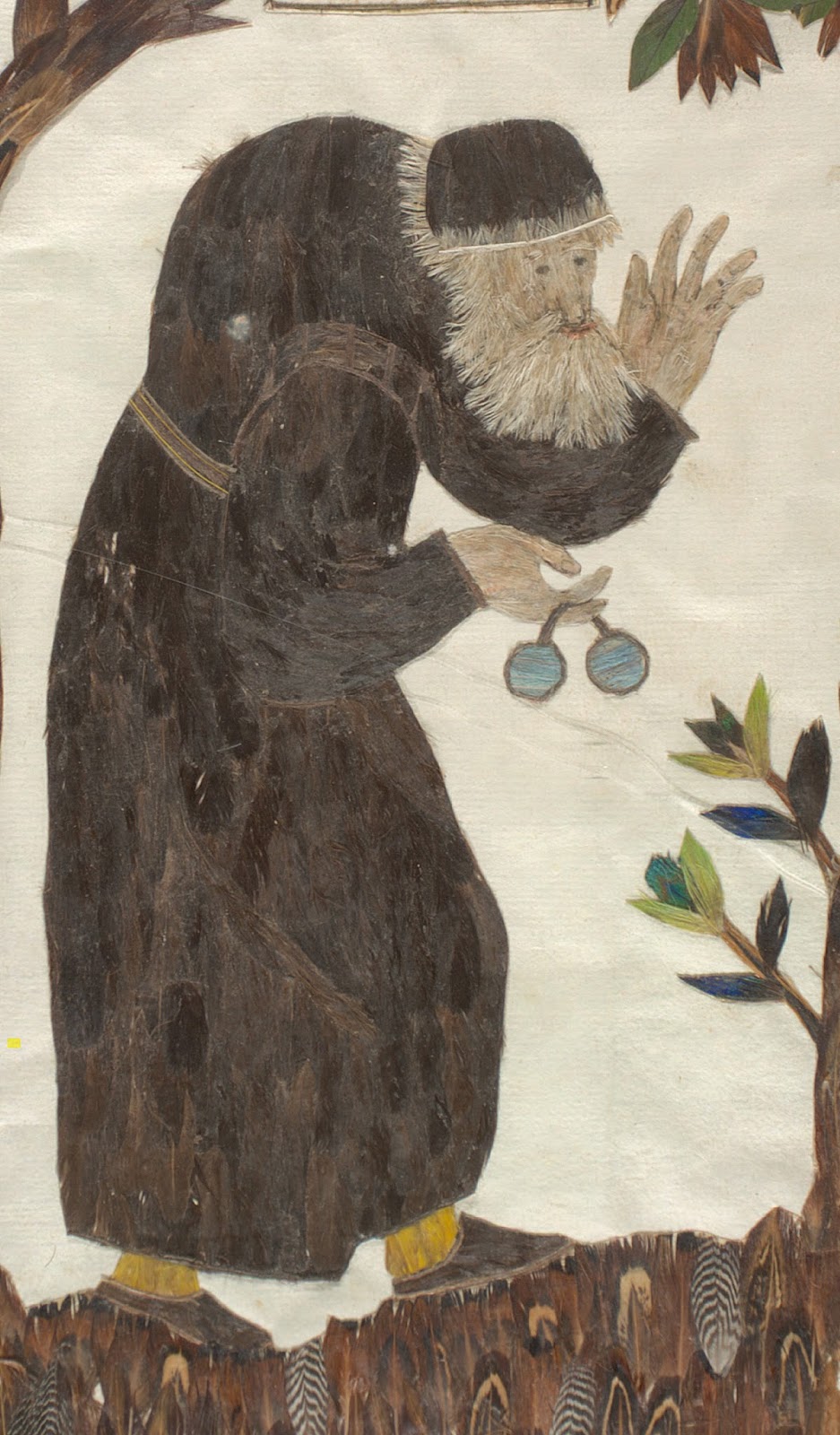 
Meanwhile, Ambrogio Bordoni—a pompous and miserly Doctor of Law—has also fallen in love with Oretta. He is committed to supplanting Giovanni as Oretta’s intended husband by any possible means.


Federigo, a Christian marriage broker, and his alter ego Melchisedec, a rich Levantine merchant (a Sephardic Jew from the Ottoman Empire) propel the action. Ambrogio Bordoni approaches Federigo for assistance, since—as a marriage broker—he should know how to unmake matches as well as make them. Federigo decides to enlist Melchisedec the Jew, who is a business partner of Oretta’s father Alamanno. 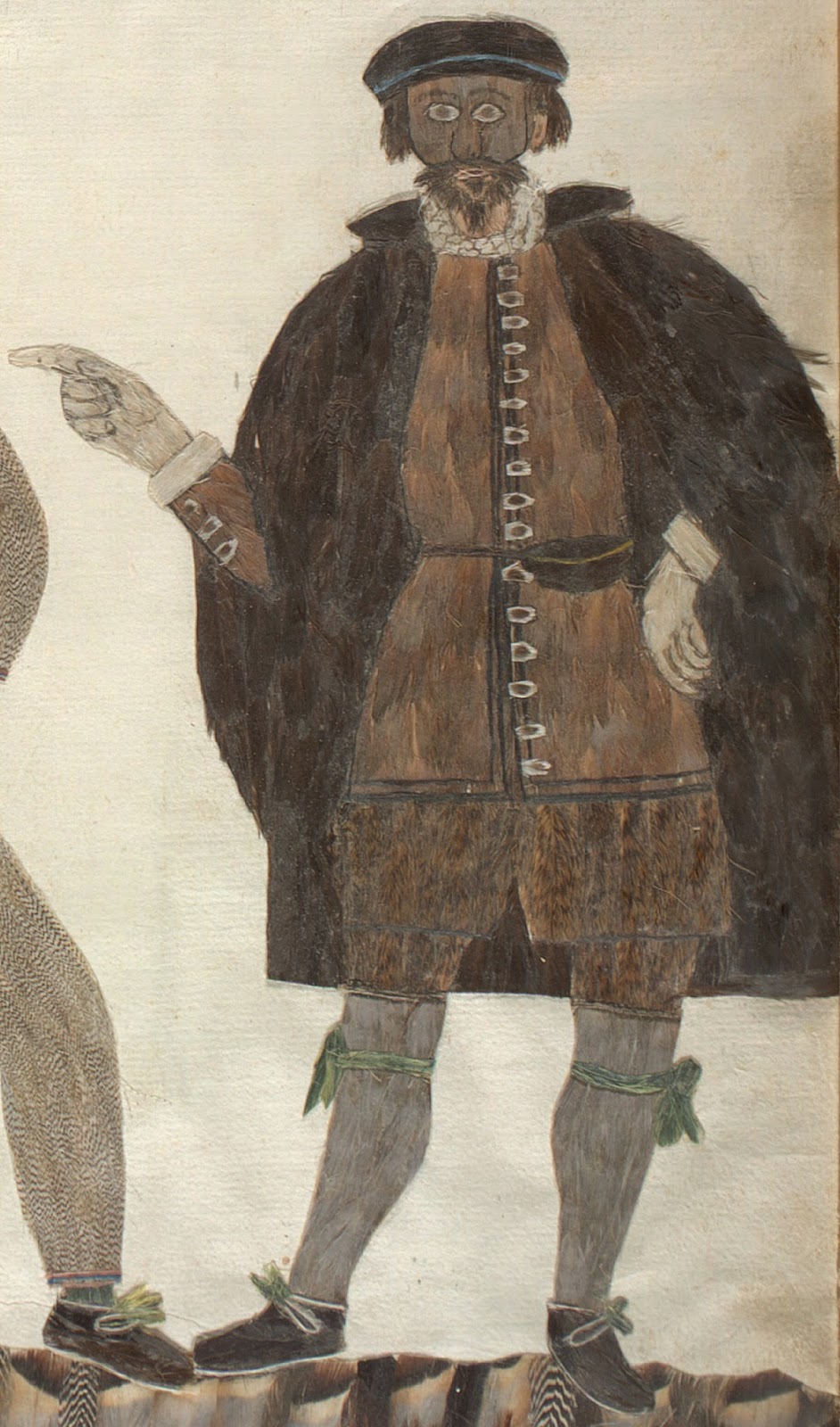 
The plan is for Doctor Ambrogio to disguise himself as another Levantine Jew from Ancona (with turban and fake beard). He will call on Alamanno Tolosini in the company of Melchisedec and insinuate the false information that Giovanni Barba is bankrupt and has fled Ancona with massive debts. This will impel Alamanno to call off the marriage and give his daughter to Doctor Ambrogio instead.

In spite of his bumbling, Doctor Ambrogio succeeds in his impersonation. Then—as planned—Alamanno breaks Oretta’s engagement with Giovanni and promises her to Ambrogio (who has since reappeared in Christian guise). The situation then spins out of control... 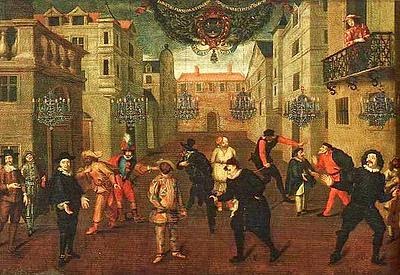 
Oretta flees the Tolosini home (by way of adjoining roof terraces) and takes refuge with Monna Simonetta (their next-door neighbor and her mother’s best friend)—leading everyone to deduce (incorrectly) that she eloped with Giovanni Barba. Giovanni, meanwhile, takes possession of Oretta’s very large dowry (Alamanno deposited this money in a local bank in Giovanni’s name and then neglected to stop the order when the marriage was called off.) 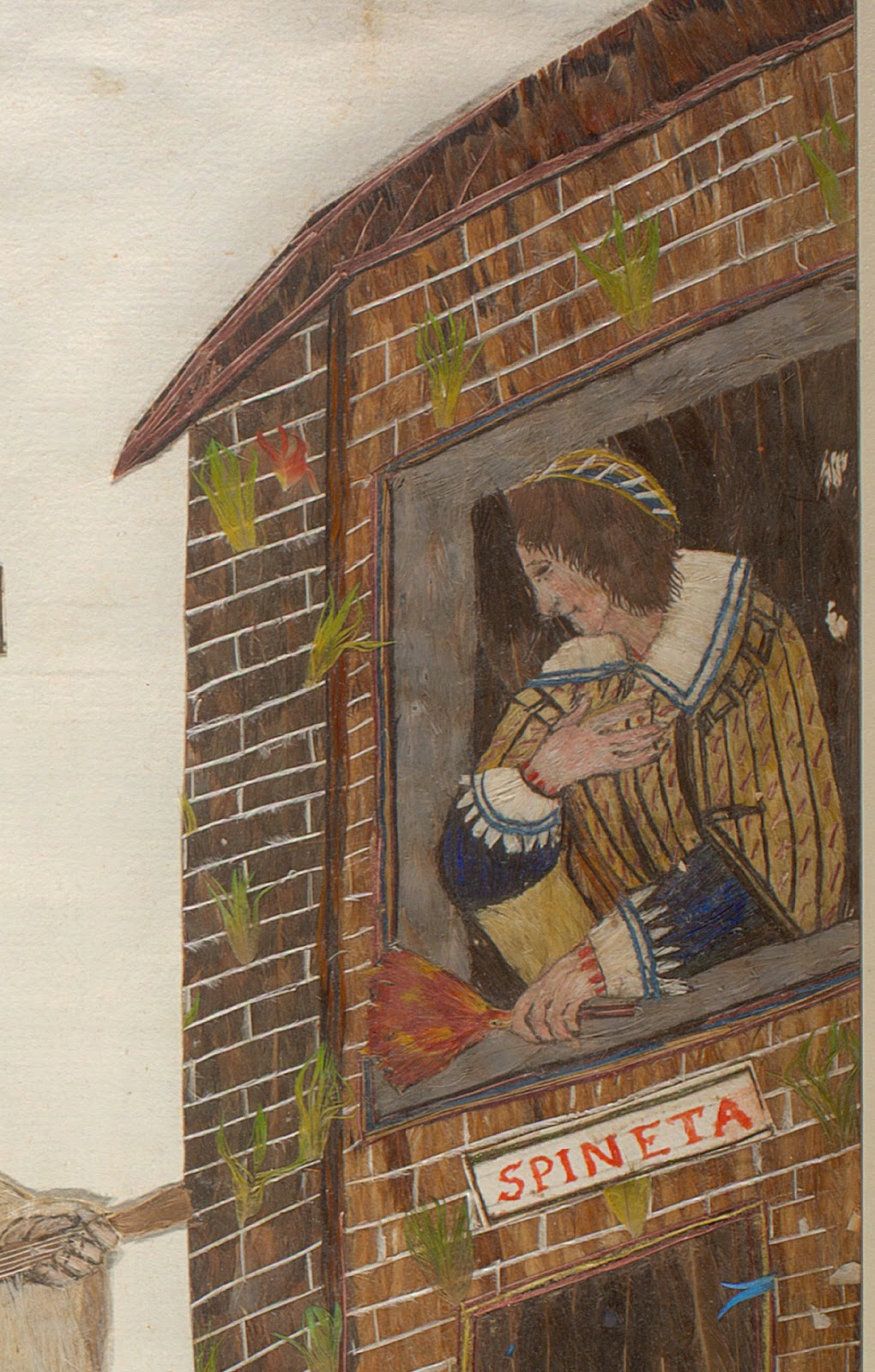 Melchisedec allows himself to be arrested for debt by his partner Alamanno—in order to bring the police onto the scene, so that he can expose the machinations of Federigo and Ambrogio (with whom he has fallen out). 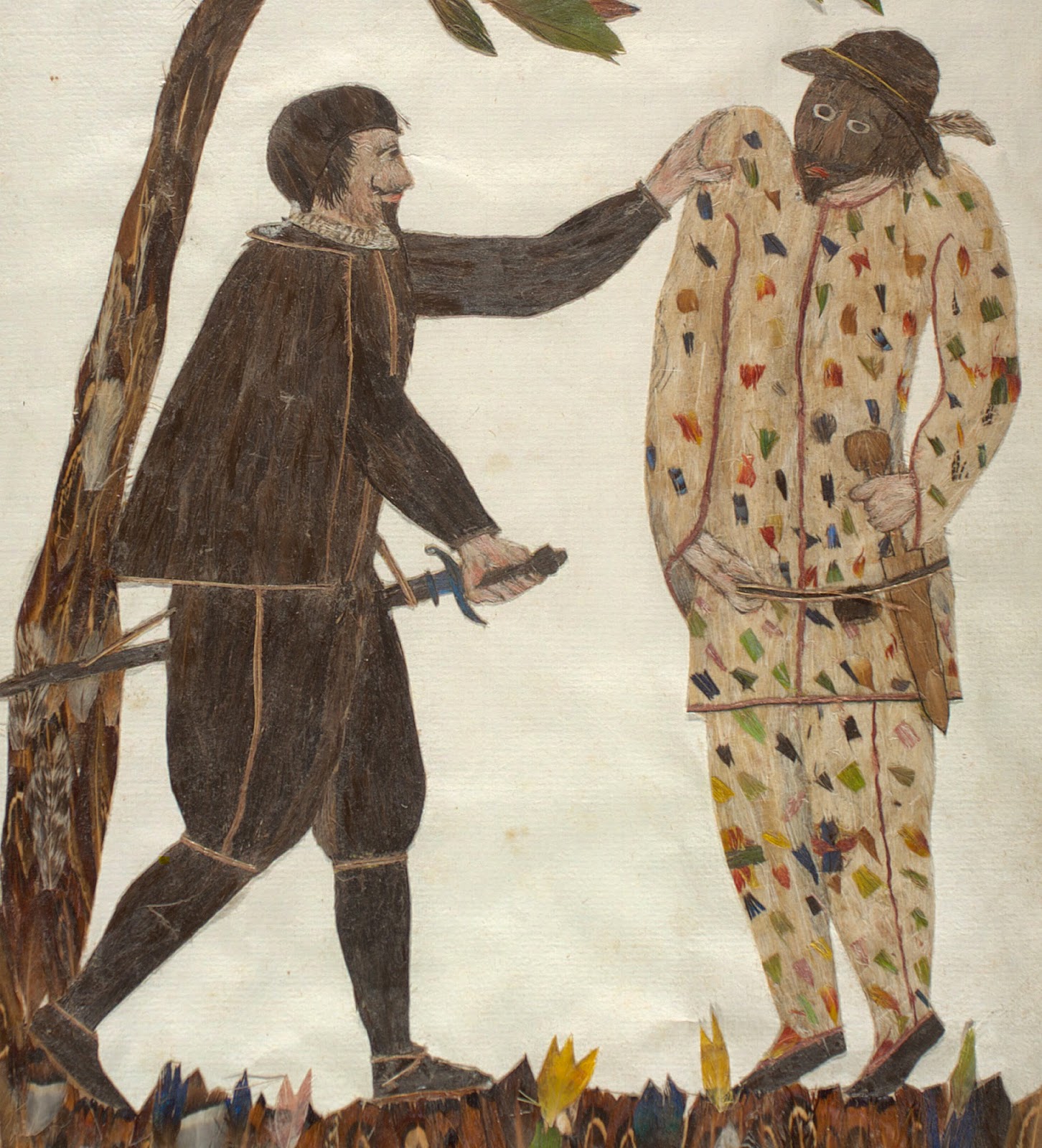 
Giovanni then reappears—and he is arrested as well for abducting Oretta and stealing her dowry.  After a series of comic misunderstandings, the truth emerges in all its complexity and improbability.  The Jew who exposed Giovanni Barba’s bankruptcy was no Jew at all...

Too many Levantine Jews - real or disguised?
From Giovanni Grevembroch, Abiti dei Veneziani

...and Giovanni himself is rich and flourishing.  Now that Melchisedec has taken his revenge and unmasked his accomplices, he is happy to repay his debt to Alamanno Tolosini—who drops all charges against him. 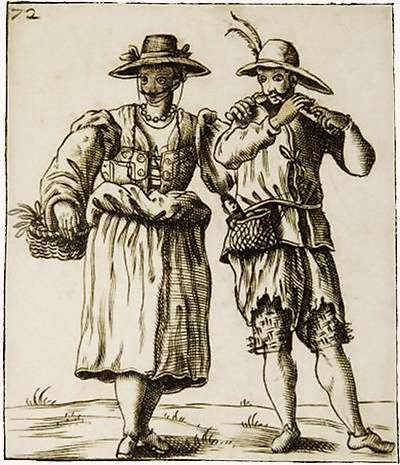 Ambrogio Bordoni panics and flees Florence, disguised as a peasant. And Giovanni Barba is reinstated as Oretta’s husband-to-be. 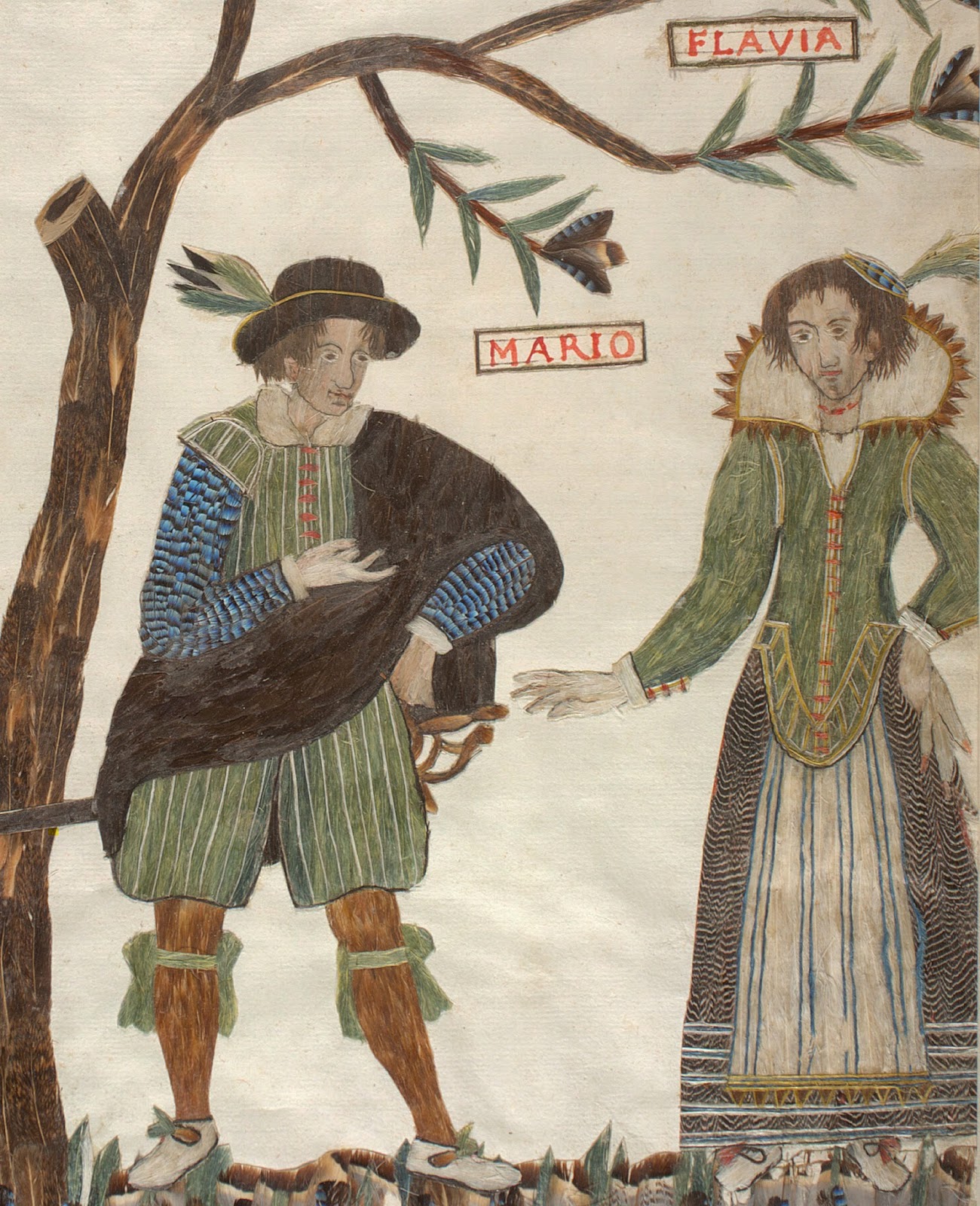 
The couple formally pledges their troth at the end of the last scene and the company repairs for a celebratory dinner—ending the play on a festive note. 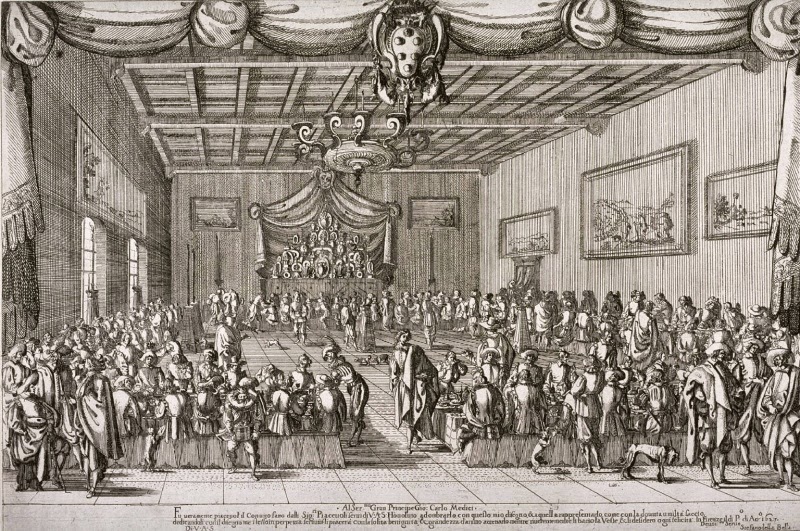 A Medici banquet in Florence by Stefano della Bella (1627)


So, the play's the thing and L'Ebreo / The Jew tells one hell of a story. A slice of daily life in Late Renaissance Florence—balanced on the edge between the intensely real and the comically improbable. 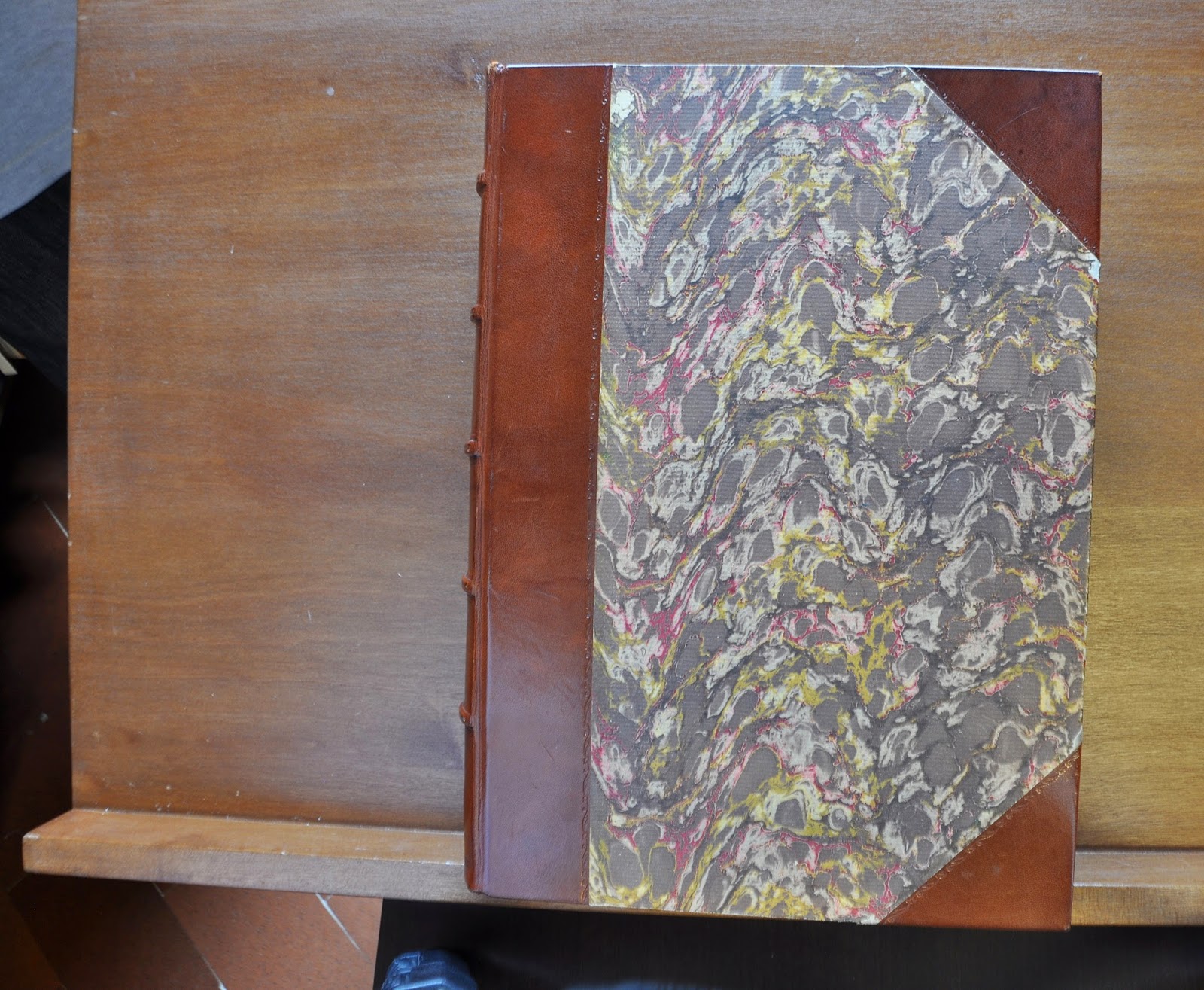 But it remains Michelangelo the Younger's least-known work—never published, performed nor even circulated in manuscript.  L'Ebreo / The Jew survives in only a single copy: a rough working draft in the archive of the Buonarroti family in Florence—filling 116 folios (232 sides), written in evident haste, with much crossing out and revision. 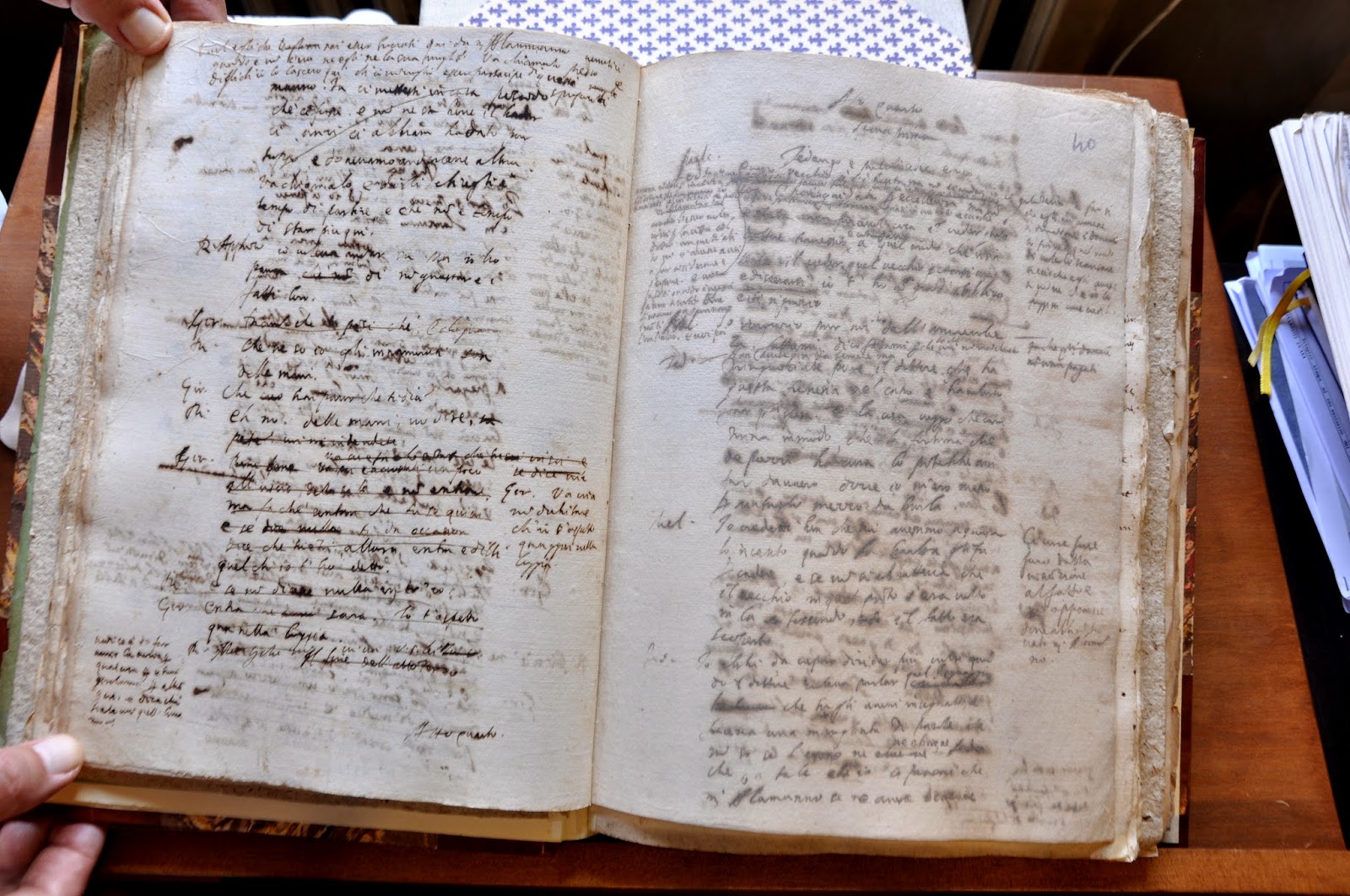 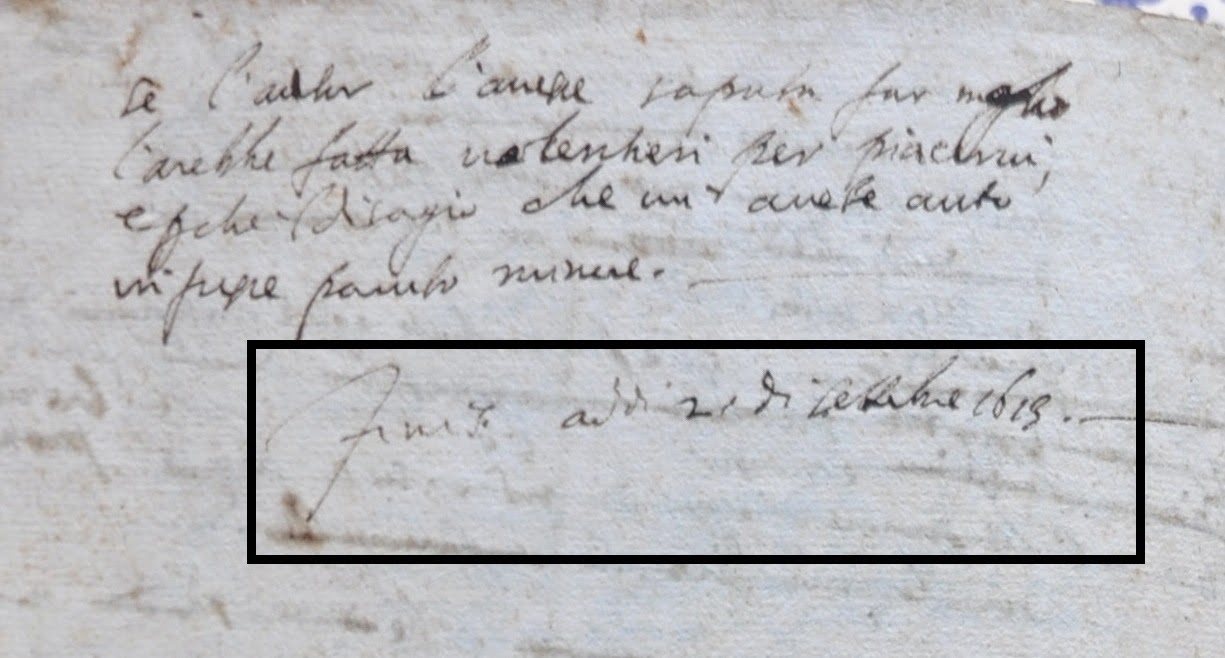 But L'Ebreo / The Jew was still far from performable. The author left major inconsistencies in the story line, frequent shifts in the delineation of characters and sometimes rudimentary dialogue. 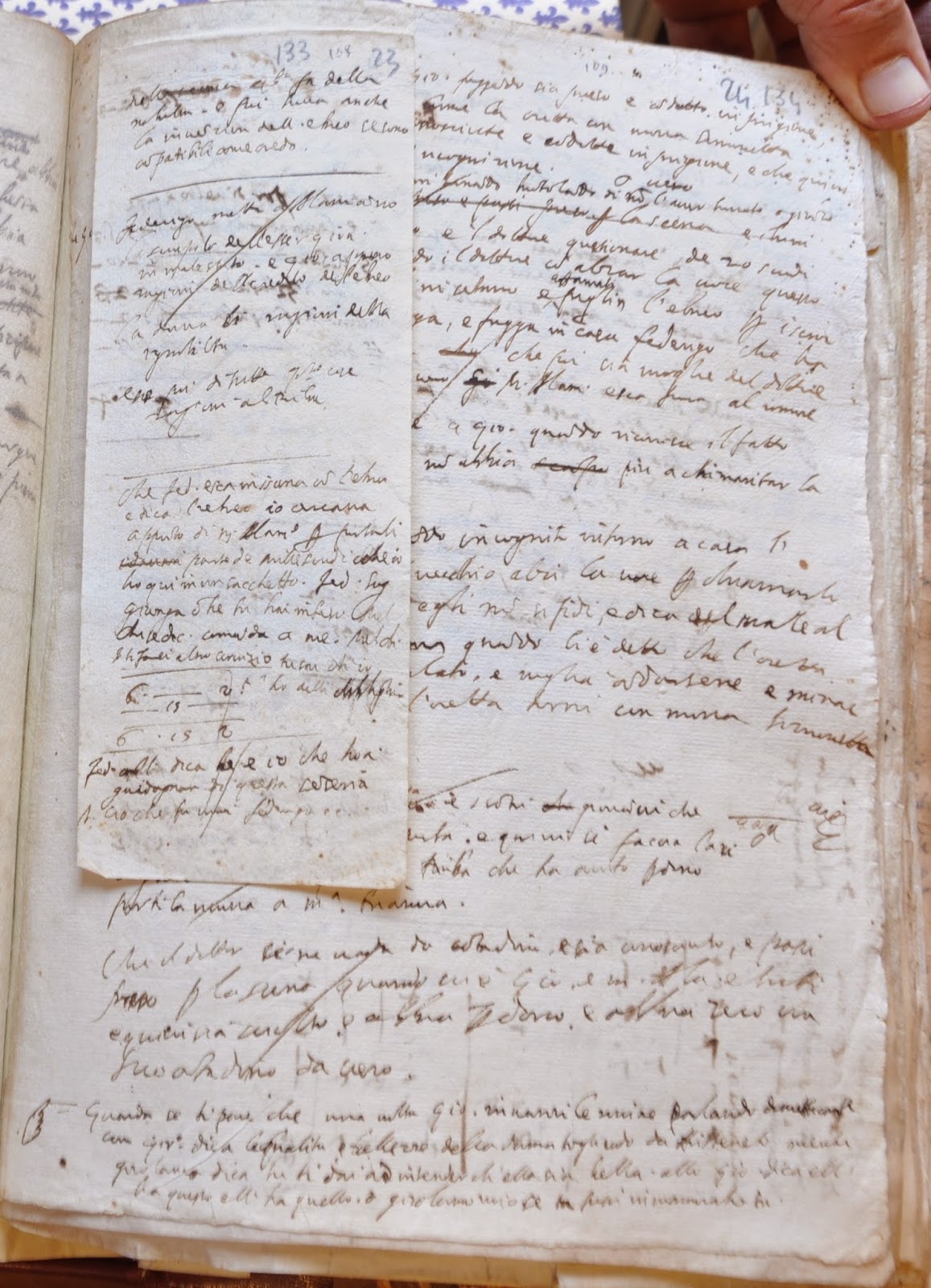 A typical page of working notes for L'Ebreo / The Jew.


Michelangelo the Younger briefly resumed work on L'Ebreo / The Jew  some years later, composing a new prologue, redrafting the first two scenes (out of seventy-four) and dashing off many pages of notes and suggestions.

L'Ebre0 / The Jew is full of wonderful stuff. Intriguing characters... Sporadically brilliant dialogue... Startling situations... Privileged glimpses of everyday life in Medici Florence... Plus a Jew in the midst of the action.

But the author left us a dynamic work—still in progress after four centuries. How do we determine its essential meaning—on the page and between the lines?

And then, how do we bring his characters to life and make them speak—on the stage to audiences today? 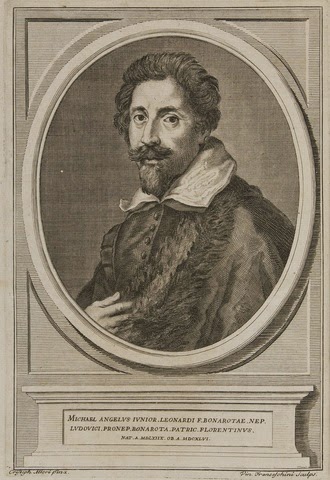